It didn’t break any more records this weekend, but James Cameron’s 3D epic "Avatar" came close, taking in $30 million in domestic box office over the weekend, according to studio estimates.
With $594.5 million grossed so far in North America, the Fox release will surpass Cameron’s last movie, 1998’s "Titanic," later this week as the all-time domestic box-office champion ("Titanic" grossed $600.8 million domestically). Already the all-time leader in foreign and global ticket revenue, "Avatar" is expected to pass the $2 billion mark in worldwide gross when international totals are announced later on Sunday.
Coming in second at this weekend’s domestic box office, Mel Gibson thriller "Edge of Darkness" grossed an estimated $17.1 million over its first three days.
Officials from Warner Bros., which paid about $27 million to acquire domestic distribution rights for "Edge" from GK Films, say they’re pleased with the opening for the R-rated film, which drew a "B-plus" grade from movie word-of-mouth research firm Cinemascore.
"Once in a while, you do get lucky," said Warner distribution president Dan Fellman. "There were companies who do tracking that had us in the 10-12 range. But to me, it was all about getting a good Cinemascore number and getting good exit polling."
Fellman added that he was pleased that the movie was a bit more demographically balanced than he’d suspected going in, with the audience registering 53 percent male (there were fears the dude quotient would be much higher). Ninety percent of the audience was over the age of 21, and exit polls also showed that 78 percent of the audience came to see Gibson in his first starring role since 2002.
Of course, with GK Films paying a reported $80 million to produce the gritty adaptation of a 1985 BBC miniseries, the decent word-of-mouth will have to translate into something in the coming weeks for the film to turn a profit. 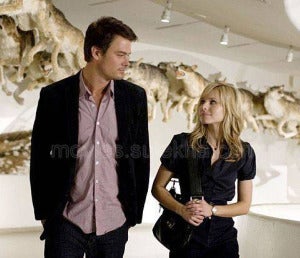 Also opening wide this weekend was Disney’s romantic comedy "When in Rome," starring Kristen Bell and Josh Duhamel. The lightly regarded, low-budget film grossed $12.1 million in its first weekend — good enough for third place in a box office that was actually down 6 percent year to year, compared to a weekend last year that featured the Super Bowl.
Among holdovers this weekend, Fox family movie "The Tooth Fairy" held Rock-solid at $10 million, dropping less than 30 percent from its premiere-week total and bringing its two-week domestic grosss to $26.1 million. The movie has a reported production budget of $48 million.
Also holding well enough to avoid money trouble in week two, Sony/Screen Gems horror film "Legion" took in $6.8 million. It was a drop of over 60 percent, but it did bring the $25 million Dennis Quaid movie’s domestic gross up to $28.6 million.
And in week three, Warner’s "Book of Eli," an $80 million post-apocalyptic film starring Denzel Washington and Gary Oldman, grossed $8.8 million to bring its domestic total to $74.4 million. Foreign grosses have just started rolling in for the film.
Meanwhile, dropping out of the top 10 after just two weeks, CBS Films’ initial effort "Extraordinary Measures" declined 57 percent to $2.6 million. The film, which stars Harrison Ford and Brendan Fraser, cost $31 million to make and has only grossed $10.4 million.
Here’s how the top 10 at the domestic box office shaped up overall:
"Avatar" ($30.0 mil.)
"Edge of Darkness" ($17.1 mil.)
"When in Rome" ($12.1 mil.)
"The Tooth Fairy" ($10.0 mil.)
"Book of Eli" ($8.8 mil.)
"Legion" ($6.8 mil.)
"The Lovely Bones" ($4.7 mil.)
"Sherlock Holmes" ($4.5 mil.)
"It’s Complicated" ($3.7 mil.)
"Alvin and the Chipmunks: The Squeakquel" ($3.4 mil.)
x
Looks like you're enjoying reading