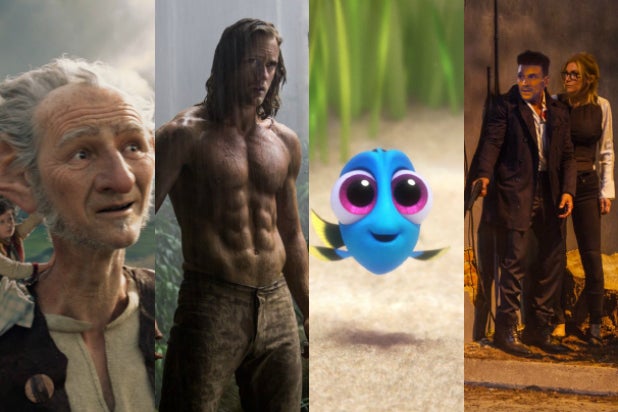 This weekend’s new wide releases will all be jockeying for second place as Disney-Pixar’s “Finding Dory” is expected to swim past the competition to take the first place for a third straight weekend.

The record-breaking animated feature could earn up to $50 million over the long holiday weekend — with a boost from Sunday, ahead of Monday’s Independence Day holiday.

The film took in $73 million last weekend after hooking $135 million on its opening weekend, a record for an animated movie.

The real competition will be for second place with three newcomers hitting theaters.

Disney is releasing Steven Spielberg‘s Roald Dahl adaptation “The BFG” on 3,357 screens, the distributor is expected to lose to itself once “Dory” swims to the top. The film, warmly reviewed so far with a Rotten Tomatoes score of 73 percent, is expected to open at around $26 million, with the studio predicting approximately $30 million.

Given that the production budget was estimated at $140 million, those opening numbers are decidedly low — particularly given the pedigree of the talent involved. The film stars Oscar winner Mark Rylance as the “big friendly giant.”

The film faces stiff competition from the Universal-Blumhouse horror sequel “The Purge: Election Year” and Warner Bros.-Village Roadshow action adventure “The Legend of Tarzan,” which are both tracking similarly in the mid-$20 millions.

Revolving around Tarzan’s return to the jungle, “The Legend of Tarzan” opens on 3,561 screens. While the domestic opening will likely be soft, the film should have a strong showing internationally as it rolls out abroad in the coming weeks — most notably on July 19 in China, directly after a blackout period for U.S. releases.

Meanwhile, Universal is banking on somewhere near $25 million for “The Purge” — made on a much more modest budget of $10 million.

“The Purge” sequel stars Elizabeth Mitchell (ABC’s “Lost”) as a presidential candidate who is running on the platform of a Purge-less society, attempting to eliminate the one day when killing is deemed legal. Frank Grillo (Crossbones in the “Captain America” series) returns as police sergeant Barnes.

Set to open on 2,787 screens, the R-rated horror sequel is expected to continue its series tradition of high revenue margins — with some prognosticators telling TheWrap it could beat out “BFG” and “Tarzan” for a surprise second-place spot.

Building off the success of the first two “Purge” films, the franchise has so far earned $200 million worldwide.