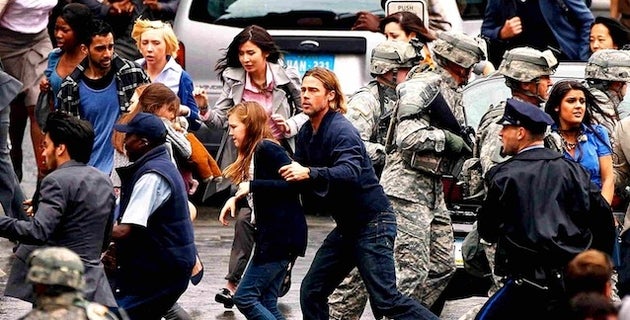 So much for bad buzz, because "World War Z" is not the box-office disaster that some observers had gleefully speculated it would be.

The zombie thriller grossed a solid $3.6 million in late night showings Thursday night, according to studio estimates. The Brad Pitt-led cast of thousands racked up those numbers in 2,600 screens. It expands to more than 3,600 screens on Friday and is projected to generate roughly $50 million over the weekend.

The midnight numbers fall short of those generated by blockbusters like "Man of Steel" and "Iron Man 3," but they compare favorably with "The Great Gatsby," which earned $3.25 million in its late night showings on its way to a $50 million opening.

Despite the hot start, "World War Z" is not expected to be the weekend's top film. That honor will likely go to "Monsters University." The 3D prequel to 2001’s “Monsters Inc.” is projected to matriculate with around $70 million.  If tracking holds, that will give Pixar its 14th consecutive first place opening.

Still it's a remarkable turn around for the $190 million-budgeted "World War Z," which had been plagued with reports of cost-overruns and expensive re-shoots, including an 11th hour decision to cook up a new ending.

The global backdrop of the zombie pandemic film appeared to be paying off as well. "World War Z" grossed a total of $5.7 million internationally on Thursday from territories like Korea, Argentina and Australia.

"World War Z" finds Pitt as a United Nations bureaucrat racing around the world in the hopes of stopping a virus that's turning the population into flesh-eating members of the undead. Reviews have been decent with the film earning a respectable 68 percent "fresh" rating on the critics aggregator Rotten Tomatoes.