Freddy just got fingered for yet another sequel.

The Warner/New Line reboot of "Nightmare on Elm Street" enjoyed the best April/May horror opening ever this weekend, grossing $32.2 million in the U.S. and Canada, according to studio estimates. 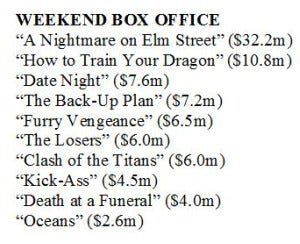 "We don’t have a story yet, but this is the largest horror opening in the April-May corridor, and it just proves there’s a lot left in the franchise," said Warner distribution president Dan Fellman.

Finishing second in its sixth weekend of release, DreamWorks Animation’s "How to Train Your Dragon" continued its strong hold on family audiences, grossing another $10.8 million, declining less than 30 percent week to week and upping its six-week cumulative gross to $192.4 million.

The film, starring Brendan Fraser, and co-financed by Summit, along with Participant Media and Imagenation Abu Dhabi, costs $35 million to produce, before significant location tax breaks and rebates were thrown in. Significant foreign pre-sales were also realized. Pre-release tracking predicted an opening in the $7 million-$10 million range. 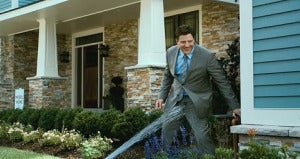 Meanwhile, among holdovers, Fox’s “Date Night” continued to hold strong, grossing $7.6 million and dropping less than 30 percent in its fourth weekend in theaters. Directed by “Night at the Museum’s” Shawn Levy, and pairing Tina Fey and Steven Carell, the $55 million film has now grossed $73.6 million.

Warner’s 3D “Clash of the Titans,” meanwhile, surpassed the $150 million mark in the U.S. and Canada, also registering a $6 million performance in its fifth weekend.

For Warner, which has greenlit a 3D “Titans” sequel, too, the big story was “Nightmare,” which has a production costs of only around $27 million.

It’s the second horror reboot to hit it big for the studio in the last 14 months, with “Friday the 13th” opening to $40.6 million on Valentine’s Day weekend last year.