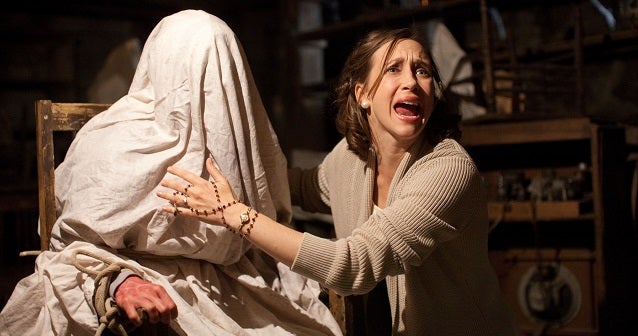 It’s one of Hollywood’s more bizarre business realities: Young women can make or break horror movies at the box office.

And it’s not a blip. “Mama” drew a crowd that was 61 percent women, 63 percent under 25 when it topped the box office in January, and young women were more than half the audience for “Texas Chainsaw Massacre,” another horror film that hit No. 1 that month.

“Conjuring" director James Wan "really made a very smart, extremely well-crafted movie, and I think that’s the primary reason it connected,” said Jeff Goldstein, executive vice president of domestic distribution at Warner Bros., which distributed the New Line film. “But why these movies are so popular with young women is a tougher question."

Part of it, he said, might be that they "provide some common ground for date night, they’re movies that young women and men can both enjoy — presuming they both enjoy getting scared senseless.".

The MPAA gave “The Conjuring” its “R” rating for “disturbing violence and terror" but not for gore, and that probably made it more appealing to women. Having strong female characters like Vera Farmiga and Lili Taylor didn’t hurt, either. “Mama” similarly benefitted from having Jessica Chastain as its lead and was largely devoid of blood and guts.

“That definitely made a difference with ‘Mama,'” Universal’s head of distribution Nikki Rocco said when that film opened. “Being scared can be kind of fun, being disgusted not so much.”

To that point, Sony’s remake of the horror classic “Evil Dead,” which definitely didn’t skimp on the gore, drew a crowd that was just 44 percent female on its way to a No 1 finish in April.

Rocco  wasn’t sure why young women were so hot for horror films, either: “Maybe they like hugging their dates when the scary parts come?”

She was kidding, but there is an element of truth to it, according to Callista Lee, a professor of psychology at Fullerton College in California.

"These films do often depict a working through of teen sexual angst. They are also high in tension, relevance, and unrealism, which all appeal to teens in general. Teens especially enjoy viewing films in which societal norms are violated," Lee told The Wrap.

"At least one researcher proposes that horror films stimulate emotions in teens that support gender role socialization and lead to an increased desire to 'snuggle,' especially when the female in a male-female audience pair exhibits fright and the male exhibits mastery and control."

Lee said that the violence in horror films could even serve as a substitute for sexual activity in some young people's mind.

"There is plenty of subtle (and not so subtle) eroticism in many of the films, between monster and victim as well as between possible victims. Whether there is sexual appeal or not, there is also the pleasure of imagining punishment of someone who has wronged you; something most teens feel strongly about."