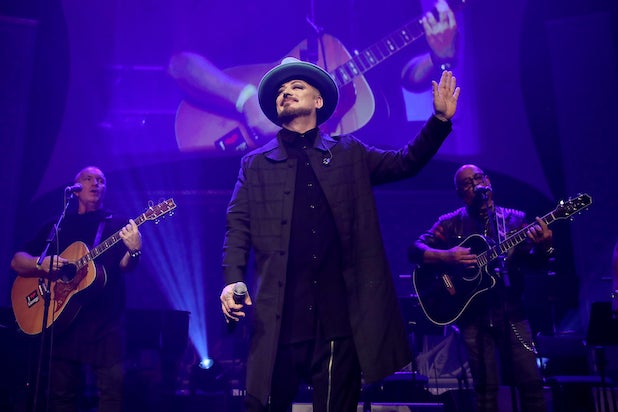 Culture Club is coming to the big screen, as MGM is set to produce a feature musical biopic about the life of singer-songwriter Boy George, an individual with knowledge of the project told TheWrap.

Sacha Gervasi, the director of “Anvil: The Story of Anvil” and “My Dinner With Herve” will write and direct the film based on George’s life. Kevin King Templeton and Paul Kemsley will produce, and George and Jessica de Rothschild will executive produce.

The untitled film will chart Boy George’s childhood in a working class Irish family through his rise to stardom along with Culture Club in the 1980s.

Hollywood is going all in on music biopics following the massive success of “Bohemian Rhapsody,” which won an Oscar for Best Actor for Rami Malek in his portrayal of Queen frontman Freddie Mercury, as well as the Elton John biopic “Rocketman” starring Taron Egerton that premiered at Cannes and opens in theaters Friday.

MGM also currently has in the works “Respect,” which stars Jennifer Hudson as the late Queen of Soul Aretha Franklin. Liesl Tommy is directing, and MGM has the project slated for a release on Aug. 14, 2020.

Boy George, born George Alan O’Dowd, was the charismatic, flamboyant and even androgynous frontman of the ’80s New Wave group Culture Club known for tracks such as “Karma Chameleon,” “Do You Really Want to Hurt Me?” and “Time (Clock of the Heart).” As a successful solo artist, the 57-year-old singer drew from glam influences like David Bowie and Iggy Pop and worked as a top record producer.

Culture Club along with George’s solo work has sold more than 50 million albums and 100 million singles worldwide, along with 7 million records in the U.S.

Deadline was first to report the news of the project.