The hottest invite of the week was Harvey and Bob Weinsteins‘ "Inglourious Basterds" premiere at Grauman’s and after-party at the Mondrian on Monday. Surprisingly, the film’s star Brad Pitt and his Angelina Jolie (photo below by Getty Images) were the first guests to arrive to the poolside bash. After giving as much time to the caged-in fans six deep across Hollywood Boulevard as to the thick press line, the power couple split from the premiere and snuck up to the Mondrian’s penthouse just around the time the guests were settling in to the film across town. 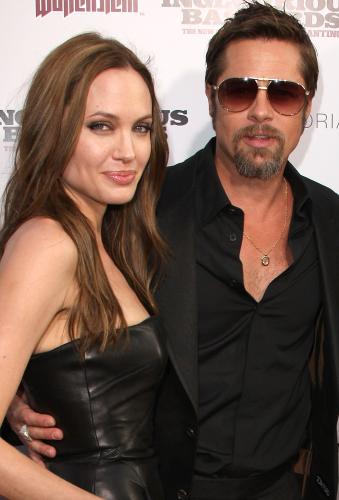 Later, their corner table next to Asia de Cuba had security guards boxing out would-be well wishers such as Tarantino alum Bridget Fonda, Kevin Pollack and Russell Simmons. The Weinsteins held court amongst the film’s stars like Eli Roth (who arrived with Camryn Manheim) as well as Baz Luhrmann. Star Diane Kruger‘s table next door, with boyfriend Joshua Jackson, had strong personal gravity, too. Film’s BJ Novak caught up with Tony Hawk, who politely declined a cocktailer’s offer of $11 cigarettes.

Non-Spoiler Alert: As a nod to one of villain Christophe Waltz’s much-discussed scenes (Waltz won the best actor award at Cannes in May for this role), they served traditional apple strudel with cream. A denim-overall-wearing Sarah Silverman toted a backpack around, presumably to take home the sought-after advance copies of videogame sequel “Wolfenstein” and Sprinkles cupcakes in the goodie bags.

On Tuesday, both film and TV talent like Warren Beatty, Eva Longoria Parker and Dylan McDermott dined with the Hollywood Foreign Press Association. No, the Golden Globes have not gone “semi annual." Instead of handing out gold, the org handed out over a million dollars in grants to film schools and nonprofits over lunch at the Beverly Hills Hotel. Other stars joining HFPA prez Philip Berk (below, sandwiched by Rose McGowan and Beatty; photo by Getty Images) to accept on behalf of their organizations included Evan Rachel Wood (CSU Northridge), Chris Pine (UCLA) and Emmy Rossum (Cal Summer School for the Arts Foundation). 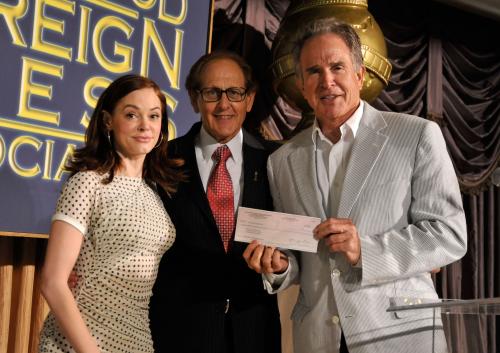 Tuesdays are normally the release day for new music. This week, it brought the release of a new label. Fergie played MC for band mate Apl.de.Ap’s launch of his new environmentally focused “Jeepney Music." Will.i.am and the entire Black Eyed Peas couldn’t resist seizing the mics and turntables for a mini performance at “green” venue Ecco.

Meanwhile across town, social web MySpace pulled off some very label-esque promotion itself. Sean Paul teamed with site’s MySpace Music for a sneak preview of his forthcoming album — 1,000 lucky blog respondents won entry in to the House of Blues for an up-close and personal Paul concert, that was then streamed (nearly) live globally for those who found themselves absent from the event’s title, “The List."

Seth McFarlane, Alex Bornstein, Mila Kunis and the cast of best comedy Emmy nominee “Family Guy” treated a crowd of industry fans to a two-hour live variety show at the Ricardo Montalban Theater on Wednesday. This was not your average ”A Night with …” Q&A panel. The speakeasy vibe of free flowing Belvedere vodka cocktails during the show, cast members smoking on stage, a full orchestra backing original songs performed in character and TV-MA (actually NC-17+) content made it feel like the smartest nightclub show not set in 1950s Las Vegas. Christine Lakin guest-starred for a live reading of an infamous “killed” abortion episode, that McFarlane lamented “will never to see the light of day."

On the rumored long-running feud with animated Fox sibling “The Simpsons," McFarlane offered “Matt Groening is a friend of mine” and teased a network version of Wednesday’s variety show for this November. 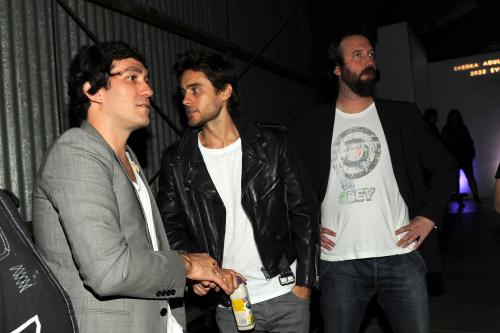 Keanu Reeves, Mena Suvari, Dylan McDermott and Jason Segal were caught on Bolthouse’s predictably star-packed coattails to view the collection taken during a trip to the world’s largest island with actor/attendee Jared Leto‘s (pictured with Bolthouse and Tom Green; photograph by Albert Michael/Startracks) band 30 Seconds to Mars. The spirits company re-branded Milk Studios for the night. First in a series of futuristic celebrations, Svedka tasked current nightlife icons with imagining the scene 24 years from now in 2033. Whether they will still be nightlife stalwarts and vodka enthusiasts in their 50s, Nicky Hilton, Kim Kardashian and actor/fellow photographer Scott Caan made it definitely “the scene” right now.

Finally on Saturday, the world champion Lakers drew private and secretive celebrity basketball league, the E League (formerly an official NBA league), out of the shadows for a summer day of hoops at L.A. Live downtown. Zach Levi, David Arquette, Sugar Shane Mosley and Joel David Moore were amongst the celeb teams who challenged civilians in a 3 on 3 tourney in a very rare free, and open to the public benefit.