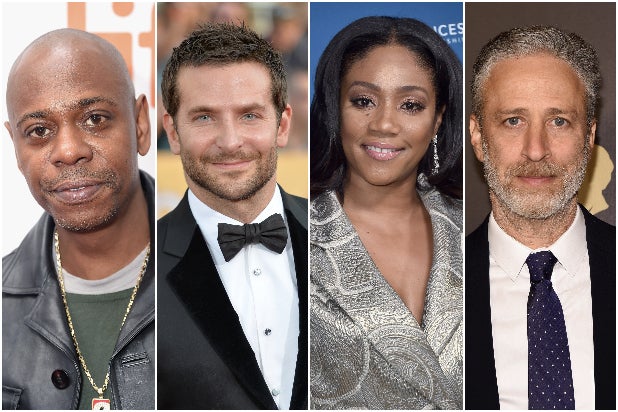 Bradley Cooper, Tiffany Haddish, Kevin Hart, Trevor Noah, Jon Stewart, John Legend and Chrissy Teigen have been added to the lineup of presenters and honorees set to salute Dave Chappelle as he accepts the Mark Twain Prize for American Humor at the Kennedy Center, the center announced Thursday.

Chappelle is the recipient of the 22nd annual Mark Twain Prize, and he’ll be recognized for his achievements on “Chappelle’s Show” and as a stand-up comedian during the Oct. 27 event, which will be broadcast on PBS on Jan. 6. It was previously announced that he would receive the prize back in May.

Cooper starred alongside and directed Chappelle in last year’s “A Star is Born,” and Stewart was the longtime host of “The Daily Show” during Chappelle’s tenure with “Chappelle’s Show” on “Comedy Central.”

Also Read: Dave Chappelle Helps Out Fans Who Were Scammed by Giving Them Tickets to His Show (Video)

Capital One is the presenting sponsor of this year’s event, and the gala will be co-chaired by Tamia and Grant Hill.

Chappelle recently wrapped a series of performances on Broadway. He previously released four stand-up comedy specials on Netflix in 2017, “The Art of Spin,” “Deep in the Heart of Texas,” “Equanimity” and “The Bird Revelations.” In 2018, he won his second Emmy award for Outstanding Variety Special for “Equanimity.”