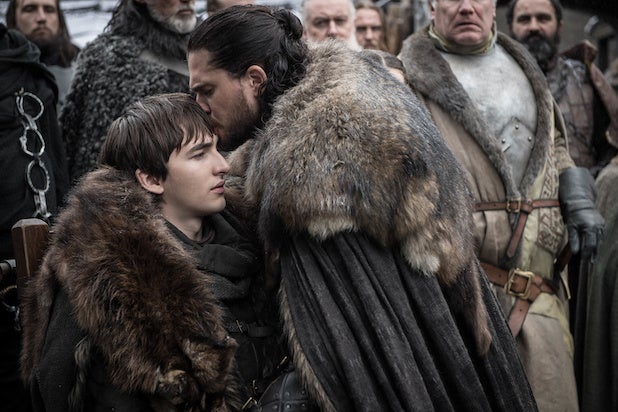 (Warning: This post contains spoilers for the Season 8 premiere of “Game of Thrones,” titled “Winterfell”)

There’s something about Bran Stark, y’all. The youngest living Stark boy, er, Three-Eyed Raven — depending on who you are asking — had a chilling demeanor on the “Game of Thrones” eighth and final season premiere when he sat outside in the freezing cold “waiting” for an old friend to show up. Like, just sat there, all day and night long until finally (spoiler alert!) Jaime Lannister showed up.

Yeah, Bran’s long, awkward, stationary position freaked out not just fans watching at home, but the on-screen residents and visitors at Winterfell. And also John Bradley, the “GoT” star who plays Sam Tarly and acts opposite Isaac Hempstead Wright’s Bran regularly.

“There’s something really eerie and disconnected about it,” Bradley told TheWrap on Monday. “When you are acting against Isaac, when he’s in character, it’s like you’re speaking to him from the other side of a wall. There is no connection whatsoever. And that can feel like a lonely place for an actor to be, because as an actor, you feed off your fellow actor’s emotion, and you feed off their intention and their motivation for everything. But when you are faced with nothing, when you are faced with like talking to a doll, that can be an alienating experience that we had to get used to.”

Bradley says working with this Three-Eyed-Raven version of Bran also “injects something into your performance.”

“You find yourself overcompensating for the lack of response that you get, like people would do if they were talking to somebody like that,” he told us. “There’s a real sense of separation between Jon and Isaac, in the same way that there’s a separation between Sam and Bran when you are just dealing with someone that is a complete blank canvas, if you like.”

And we get that he’s the all-knowing Three-Eyed Raven now, sure. But he just sat there in the cold. Why?

“The fact that he is outside all the time and he seems to be, you know, left alone and doesn’t seem to want to get into the warm with everybody else, that adds to the sense of ‘otherness’ as well,” Bradley said. “The fact that the cold doesn’t bother him and the fact that he doesn’t seem to have these base kind of human, earthly needs and requirements. He’s perfectly happy to sit outside in the cold all that time. There is something different about him from everybody else. So he’s very disconnected, he doesn’t feel the need for even warmth like human beings feel the need for warmth. So a lot of this stuff is really creating that ‘otherness’ about him.”

For real, it was very weird. If you don’t believe us, see the Bran memes for yourself here. And see more from our interview with Bradley here.