The wait is (almost) over: Netflix has set the very, very appropriate premiere date for its “Brand New Cherry Flavor” limited series and released the first teaser for the horror-thriller.

Based on Todd Grimson’s 1996 cult classic novel of the same name, the series tells the story of a filmmaker who heads to Hollywood in the early ‘90s and tumbles down a hallucinatory rabbit hole of sex, magic, revenge — and kittens. The “Brand New Cherry Flavor” limited series will launch Friday, Aug. 13. (Right, on Friday the 13th.)

Per Netflix, “Lisa N. Nova (Rosa Salazar) comes to LA dead set on directing her first movie. But when she trusts the wrong person and gets stabbed in the back, everything goes sideways and a dream project turns into a nightmare. This particular nightmare has zombies, hit men, supernatural kittens, and a mysterious tattoo artist who likes to put curses on people. And Lisa’s going to have to figure out some secrets from her own past in order to get out alive.” 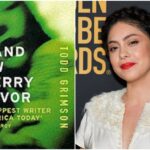 Watch the teaser for Netflix’s “Brand New Cherry Flavor” adaptation via the video above to meet Salazar’s Lisa and her whole mess of Hollywood problems.

Ordered to series at Netflix in November 2019, the show stars Salazar, Eric Lange (“Escape at Dannemora”), Catherine Keener (“Kidding”), Manny Jacinto (“The Good Place”) and Jeff Ward (Marvel’s “Agents of S.H.I.E.L.D.”), among others.

Netflix’s limited series adaptation of “Brand New Cherry Flavor,” which will consist of eight hourlong episodes, hails from Nick Antosca (“The Act,” “Channel Zero”), through his production banner Eat the Cat and under his overall deal with UCP (a division of Universal Studio Group), and Lenore Zion (“Billions,” “Channel Zero”). Antosca and Zion serve as executive producers, showrunners and writers.