Few things are more frustrating to watch than a show that is all style and very little substance. But the themes of Netflix’s new Gothic horror series, “Brand New Cherry Flavor,” are so resonant and timely that it wouldn’t be entirely fair to accuse it of that offense even though it makes no good use of them. Instead, the show overcompensates by using horror staples like the undead, a witch’s curse and a classic rock soundtrack to cover up what it lacks — a point.

And yet the premise is so promising! Creators Lenore Zion and Nick Antosca present a dark fiction piece set in early-’90s Los Angeles that hinges on the terrible treatment of female filmmakers whose work is often ignored or even co-opted by greedy, old white men with more clout. This still happens, with myriad think pieces interrogating the problem, and particularly to young non-American directors like the protagonist in “Brand New Cherry Flavor.” Exploring their boiling hot rage on account of this is ripe for genre material.

But does this show really do that? Eh, not really. The series centers on Lisa Nova (Rosa Salazar), a young director from Brazil who’s just stepped foot in the City of Angels with a finished film that’s so wonderful that it immediately catches the attention of award-winning auteur Lou Burke (Eric Lange). He entices her with a bunch of industry speak about how he can bring it to the right hands, while being extra touchy with her bare leg. Though Lisa mercifully pushes his hand away, he takes it as a slight and ends up stealing her film and putting his name on it.

It’s infuriating and devastating, obviously. And Lisa has every right to want to, as she puts it, “set his life on fire.” She came all the way to Hollywood to achieve success and her first whiff of it is unpleasant. On top of that, she feels she has something to prove to her estranged mother whom she never really met (more on that in a bit). Since it’s, well, L.A., Lisa stumbles across a witch named Boro (Catherine Keener, in perhaps her hammiest role yet), of sorts, and takes her up on her offer to sabotage Lou.

From there, “Brand New Cherry Flavor” goes from a sizzling feminist diatribe that immediately hooks you with its premise to a woman terrified of her own power — and that of the totally berserk woman she ill-advisedly turned to for sweet, sweet revenge. Boro, as we learn, is living a double life in what looks like a creepy greenhouse that she’s populated with zombies that she uses as pets/servants. Kudos to production designer Troy Hansen, who really makes Lisa’s every visit to Boro’s lair look wilder than the last time.

There are many things in “Brand New Cherry Flavor” that can whet most horror fans’ appetites, including vines growing out of Lisa’s apartment into what appears to be a dungeon, a sex remedy, her throwing up kittens at Boro’s ill wil, and phantasma lurking around every corner (or at the dinner table). Zion and Antosca are clearly throwing everything at the wall here to see what sticks. 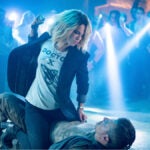 But not much does. The series is fun to watch, but it runs away from itself around the midway point when things hit the fan for Lisa and the curse goes totally awry. Boro becomes the master in Lisa’s story of vengeance, while Lou, on to Lisa early on, wages his own violent war against her supernatural one.

It’s a lot. Meanwhile, the maternal themes — one between Lisa and Boro and another between Lisa and her real mom — come into greater focus before the writers drop the ball. Is Lisa really trying to prove something to her mother, or is she subconsciously desperate for any kind of support, even the grisly kind? She slips into Boro’s clutches pretty quickly.

But what about her rage at Lou because he’s the jerk who plundered her art? That’s still, well, part of the story. But there are so many other things flying around in “Brand New Cherry Flavor” that you almost forget that there is a whole film to recoup. The film itself, and its actress, Mary Gray (Siena Werber), have their own subplots in a series that continues to unravel with empty suspense and dark rooms. What’s missing is Lisa’s humanity. She’s arguably the only “normal” character, aside from her best friend (played by Manny Jacinto, in a thankless role), yet she’s written so one-dimensionally that we’re forced to rely on the effects to uplift eight increasingly wild episodes. It just doesn’t.

As fun and ballsy as it is at times, “Brand New Cherry” reads disappointingly hollow.