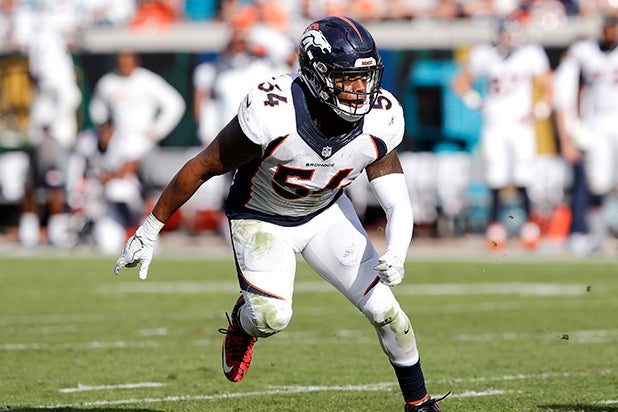 Just days after New York Giants fullback Nikita Whitlock had his home spray-painted with swastikas, “KKK” and “Trump” during a break-in, another NFL player revealed that he has received a racist, hate-filled letter.

Denver Broncos linebacker Brandon Marshall shared the handwritten note on Friday that he received at the team’s headquarters in Englewood, Colorado — and it was vicious to say the least.

It calls the Super Bowl champion “worthless,” a “gorilla/monkey” and says he should “move back to the jungle” — all in capital letters. It also included a direct threat, telling Marshall: “Your time is coming, watch out n—–!!”

“The hatred by some against people of color is one of the reasons we are where we’re at in the world today and they wonder why we feel the way we do and take the stances that we take,” the Las Vegas native wrote on Instagram beside a photo of the letter.

The hatred by some against people of color is one of the reasons we are where we’re at in the world today, and they wonder why we feel the way we do and take the stances that we take. I received this letter at work.

Marshall, 27, was one of the first NFL players to join Colin Kaepernick in his protest of the national anthem earlier this year by taking a knee during the Bronco’s season opener against the Carolina Panthers.

“Colin is my fraternity brother, my ex-teammate,” the University of Nevada alum said. “I support Colin and what he’s trying to do.”

The political stance quickly lost him an endorsement deal as the Air Academy Federal Credit Union pulled its backing of the athlete.

“Although we have enjoyed Brandon Marshall as our spokesperson over the past five months, Air Academy Federal Credit Union (AAFCU) has ended our partnership,” President/CEO Glenn Strebe said in a statement in September.