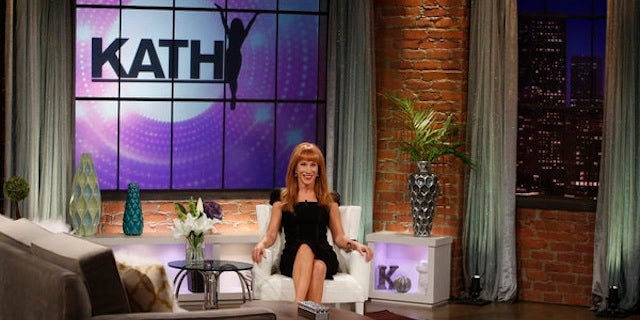 Update 2:46 p.m.: A source close to the production confirms the cancelation to TheWrap.

Bravo is actually doing what many viewers wish they could do: shutting down Kathy Griffin.

On Friday, the actress/comedienne revealed the news during her stand up show in Cincinnati.

A Bravo rep tells TheWrap the network has no comment.

According to BravoRatings.com, an independent site which tracks viewership on the network’s shows, “Kathy” averaged 417,167 viewers and 231,583 viewers in the ad-coveted 18-49 demo. In February, the series was moved out of its primetime slot at 10 p.m. on Thursdays to 11:30 p.m.

Over its two seasons, the weekly “Kathy” saw various format changes. For the majority of Season 1, which premiered in April 2012, the series avoided the usual late night celebrity guests in lieu of a panel of “real folks” discussing TV and newsy hot topics. It changed its tune later on the season and began booking celebrity guests alongside its panel. The “real folks” panel didn’t return for Season 2, replaced by three celebrities.

"Kathy" was produced by Donut Run and Embassy Row for Bravo with Griffin and Michael Davies (“Who Wants to Be a Millionaire,” “Watch What Happens Live”) serving as executive producers on the series.

Last month, it was reported that Griffin teamed up with her CNN New Year’s Eve co-host, Anderson Cooper, for a one-hour talk show pilot for the cable news network.

Griffin has won two Emmys for her previous Bravo series, “Kathy Griffin: My Life on the D List” and four of her comedy albums were nominated for Grammys.