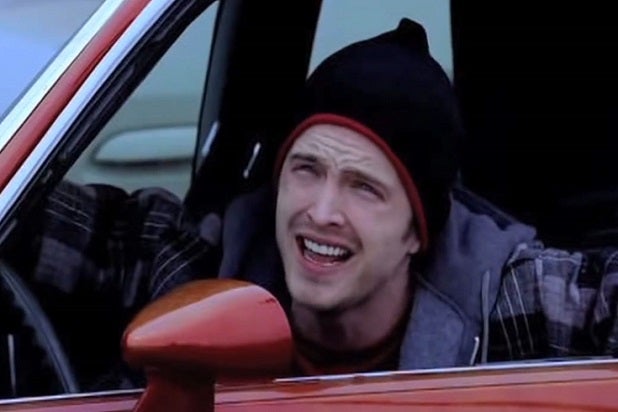 “Anything Vince is involved with, I’m there,” Paul told the Associated Press. “I owe him my entire career. And the idea of jumping into the skin of Jesse Pinkman again in his lighter days — because it’s all a prequel — it would be fun.”

The inclusion of Pinkman on “Better Call Saul” — which will center around Bob Odenkirk‘s ethically-flexible attorney Saul Goodman — would make sense, given Pinkman’s background as a ne’er-do-well who dabbles in drug dealing.

The series, slated for a November premiere, has already cast Jonathan Banks to return as Mike Ehrmantraut, who was occasionally Goodman’s private investigator, cleaner and fixer.

Alas, it appears that DEA agent Hank Schrader won’t be dropping in. Dean Norris, who played Schrader on the series and currently stars in CBS’s “Under the Dome,” which is preparing to enter its second season, recently said that he’s unlikely to participate in the series.

“I don’t think they’ll let me do a little cable show,” Norris opined. “But I think it’s going to be awesome. So I can’t wait to see it.”