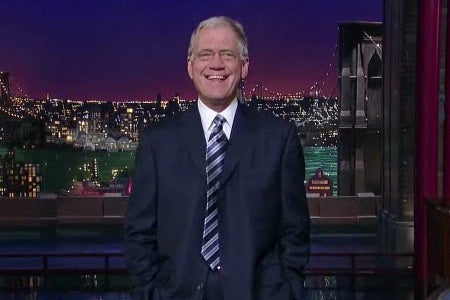 He opened the show after the show with a joke.

"Did, uh, did your weekend just fly by?" David Letterman began his monologue on Monday during a taping of the "Late Show," the first since his shocking on-air admission that he had sex with his staffers and was the target of an alleged extortion plot.

And, just like it did then, the audience roared with laughter.

"I’ll be honest with you folks, I’d give anything to be hiking on the Appalachian trail. I got in the car this morning and the navigation lady wasn’t speaking to me."

There was, in fact, plenty of laughter last week during the "Late Show" host’s admission. The only thing missing was an apology.

That came after the monologue.

Letterman apologized for the attention aimed at his staff and family, and for the “stupid [situation] I’ve gotten myself into.”

“I’m terribly sorry that I put the staff in that position,” Letterman said.  “Inadvertently, I just wasn’t thinking ahead.  And, moreover, the staff here has been wonderfully supportive to me, not just through this furor, but through all the years that we’ve been on television and especially all the years here at CBS, so, again, my thanks to the staff for, once again, putting up with something stupid I’ve gotten myself involved in.”

“Now the other thing is my wife, Regina. She has been horribly hurt by my behavior, and when something happens like that, if you hurt a person and it’s your responsibility, you try to fix it,” Letterman said.  “And at that point, there’s only two things that can happen:  either you’re going to make some progress and get it fixed, or you’re going to fall short and perhaps not get it fixed, so let me tell you folks, I got my work cut out for me.”

It’s not clear from the transcript, provided by CBS, whether or not the studio audience laughed during Letterman’s apology.

The oddest part of the original admission of his sexual relationship was the laughter from the audience — although they probably should be forgiven for thinking it was a long setup to a comedy bit.

Meanwhile, CBS moved over the weekend to scrub clips of Thursday’s 10-minute desk-side monologue from YouTube.

Gerald Shargel, the attorney for Robert "Joe" Halderman — the "48 Hours" producer charged in the alleged extortion plot — said during television interviews Monday that Letterman "wanted to get out ahead of the story, and that’s exactly what he did."

On Monday, the audience inside the Ed Sullivan Theater didn’t seem to care.

As usual, Letterman taped a second show Monday, which is scheduled to air on Friday.