She’s a familiar figure: the gorgeous teenage girl or young woman whose seduction, especially as a new best friend, is as intense as it is irresistible. Past the funky jewelry and the studied casualness, though, all that’s there are the open wounds and the self-aggrandizing lies shielding them from view. When she notices you noticing the wounds and the lies, the seduction flips into aggression. All the secrets the two of you had shared then become weapons against each other.

With her sophomore feature “Breathe,” actress-turned-director Mélanie Laurent — the co-star of “Inglorious Basterds” and “Beginners” who made her behind-the-camera debut with “The Adopted” — has made one of the best films of the year. This naturalistic teen drama is a slow boil, tracing two high schoolers’ instant bond, their few weeks of inseparability, and the long, panic-inducing, burstingly painful aftermath when the thrilling girl who’d initiated the friendship becomes her former BFF’s tormentor.

After the occasionally pokey first act, during which suburban teen Charlie (Joséphine Japy) becomes fast friends with new girl Sarah (Lou de Laâge), the low-profile teen arrives at school to find nasty notes about her posted on the walls and carved into her desk. Most painful, though, is how her former friend Sarah laughs while spilling the beans about Charlie’s sexual history — or embarrassing lack thereof — to Sarah’s new best friend.

Armed with the knowledge that Sarah isn’t who she claims to be, Charlie could fight back. But “Breathe” derives its emotional might and its shrewd observations — and ultimately its devastating conclusion — from why she doesn’t. Much of it has to do with the self-destructive patience Charlie has learned from her long-suffering single mother (Isabelle Carré), whose thorny relationships with men are both perfectly ordinary and slowly pricking her to death.

Based on a novel by Anne-Sophie Brasme, Laurent and Julien Lambroschini’s brisk French-language screenplay achieves remarkably detailed layers of sedimentation in its characterizations, particularly in how Charlie and Sarah, both the sole children of single mothers, are damaged by the older women’s muffled dysfunctions. 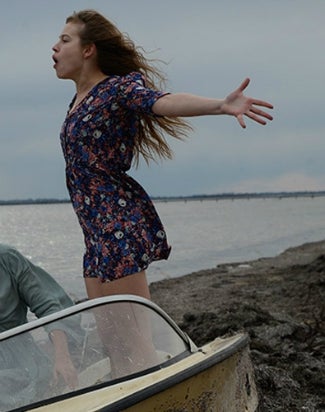 Though Sarah is the manipulative aggressor of the two ex-friends, Laurent never treats her with anything short of wholehearted compassion. A cigarette always in hand (and a few more to share with those she likes), the recent transplant from Nigeria is so worldly and above it all that she often seems like a college student visiting a high school campus, especially compared to the bookish, go-along-to-get-along Charlie.

There’s a quiet violence to Sarah’s determined hedonism at the teenage clubs, though, where all the students at their high school drink, drug, and dance away their insecurities. Or they’re supposed to. A howling Charlie can’t stop herself from attacking Sarah’s new confidant in a jealous fit, even while she herself can’t muster up the interest to listen to her own ex-BFF’s woes about being passed over for the new girl.

Anchored by exceptional performances by the main actresses, “Breathe” is a confrontation with the terrifying volatility of adolescence. Its explorations of the obsessive passions of teenage girls, especially for one another, trod well-known territory.

But “Breathe” also made me consider something I’d never thought about: how often girls and women are socialized to forgive and to empathize, as Charlie is teeth-grittingly determined to do for the largely pitiful Sarah, and as a battered woman (a minor character) does in her marriage — to their enervating detriment.

Anger doesn’t stay down, and it doesn’t rest easy. As Charlie learns too late, swallowing bile sometimes just makes it flood right back up.