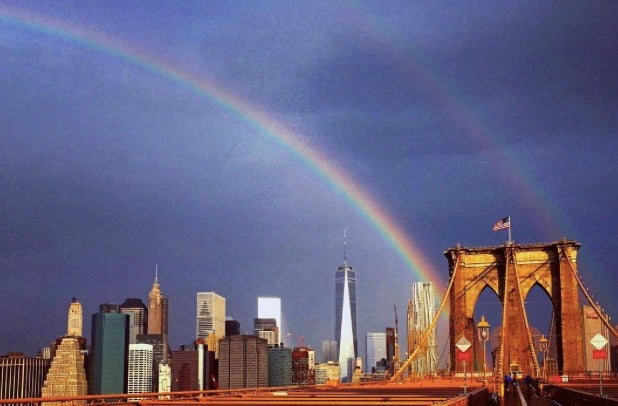 On the somber 14th anniversary of the 9/11 terrorist attacks, one image is warming Americans hearts.

A photograph of two large rainbows draped over the World Trade Center have gone viral with a #MagicalRainbow hashtag being born on Twitter.

The rainbows were spotted just after 7 a.m. ET by sports marketing executive Ben Sturner, who took pictures from his balcony.

“I see this rainbow, and it’s coming from the World Trade Center and it’s the most gorgeous rainbow I’ve ever seen,” he told NBC. “I took out my phone and started snapping photos.”

@leverageagency Best Bday present in 14 yrs This picture of hope and renewal that I feel coursing through me and out my finger tips. ThankU!

TV news networks are covering the anniversary as they normally do with flashbacks to the tragic day. And one comedic giant is doing more.

Jon Stewart will head to Capitol Hill next week to lobby for a permanent extension of the James Zadroga 9/11 Health and Compensation Act. The law is is set to expire at the end of the month. Take a look at the photos below.

#magicalrainbow few more photos I took of the Rainbow originating from World Trade Center the day before 9-11 pic.twitter.com/REtmljuYBz