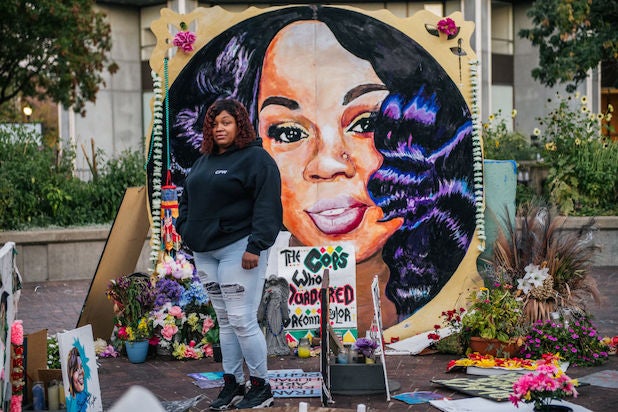 Tamika Palmer, mother of Breonna Taylor, poses for a portrait in front of a mural of her daughter at Jefferson Square Park in Louisville on September 21. (Brandon Bell / Getty Images)

A Kentucky grand jury declined to bring murder charges in the killing of Breonna Taylor, a 26-year-old Black medical worker who was killed by police in March during a botched “no-knock” raid. Instead, former Louisville police officer Brett Hankison was indicted on Wednesday on three counts of first-degree wanton endangerment.

The two other officers involved in the botched raid, Jonathan Mattingly and Myles Cosgrove, were not charged at all.

Judge Annie O’Connell, who announced the charges, said Hankison “wantonly shot a gun” into three apartments but did not say Taylor was the occupant of one of those apartments. The indictment essentially charges Hankison for the endangerment of Taylor’s neighbors, but not for the shooting of Taylor herself.

Wanton endangerment is a Class D felony and has a penalty of one to five years in prison. A warrant has been issued for Hankison’s arrest.

Also Read: Oprah Puts Billboards of Breonna Taylor Around Louisville to Demand Arrest of Police Involved in Her Death

“Jefferson County Grand Jury indicts former ofc. Brett Hankison with 3 counts of Wanton Endangerment in 1st Degree for bullets that went into other apartments but NOTHING for the murder of Breonna Taylor,” Crump tweeted. “If Brett Hankison’s behavior was wanton endangerment to people in neighboring apartments, then it should have been wanton endangerment in Breonna Taylor’s apartment too. In fact, it should have been ruled wanton murder!”

In March, Louisville police had been investigating two men they believed to be selling drugs, and a judge had signed a warrant allowing police to search Taylor’s apartment because police thought one of the men, who had dated Taylor in the past, had used her apartment to receive packages.

But during the raid of Taylor’s apartment on March 13, according to a lawsuit filed by Taylor’s family, officers in plainclothes — later identified as Jonathan Mattingly, Brett Hankison and Myles Cosgrove — broke into the apartment while Taylor and her boyfriend were asleep in bed without announcing themselves. (The LMPD has countered that the officers knocked several times and announced themselves.)

After the door to the apartment came off its hinges, Taylor’s boyfriend, Kenneth Walker, fired a shot in self-defense, according to his attorney, and hit one of the officers in the leg. The police then opened fire in response, firing more than 20 rounds into the apartment and shooting Taylor six times.