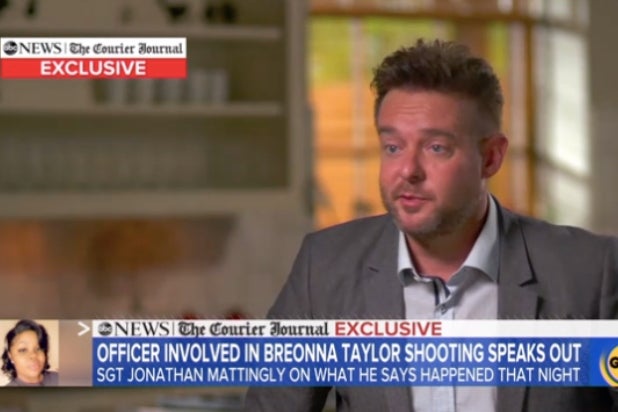 Sgt. Jon Mattingly, one of the officers involved in Breonna Taylor’s fatal shooting, believes that the 26-year-old medical worker would still be alive if police had acted faster on the night of her death.

“We expected that Breonna was going to be there by herself. That’s why we gave her so much time. And in my opinion, that was a mistake,” Sgt. Jon Mattingly to GMA’s Michael Strahan Tuesday during in his first public interview since the March incident.

Asked what he would have done differently, Mattingly said he wouldn’t have given Taylor’s boyfriend, Kenneth Walker, enough time to grab his weapon that night.

“The answer to that is simple now that I’ve been thinking about it,” Mattingly said. “Number one, we would have either served the no-knock warrant or we would have done the normal thing we do, which is five to 10 seconds. To not give people time to formulate a plan, not give people time to get their senses so they have an idea of what they’re doing. Because if that had happened, Breonna Taylor would be alive, 100 percent.”

“I feel for her. I hurt for her mother and for her sisters,” he said. “It’s not just a passing ‘Oh, this is part of the job, we did it and move on.’ It’s not like that. I mean Breonna Taylor is now attached to me for the rest of my life. And that’s not again, ‘Woe is me.’ That’s me feeling for them. That’s me having a heart and a soul.”

But Mattingly maintains that Taylor’s shooting was “not a race thing like people want to try to make it out to be.”

“This is a point where we were doing our job, we gave too much time when we go in, I get shot, we returned fire,” Mattingly said. “This is not us going, hunting somebody down. This is not kneeling on a neck. It’s nothing like that.”

A Kentucky grand jury declined to bring murder charges against any of the officers in September. Instead, former Louisville police officer Brett Hankison was indicted on three counts of first-degree wanton endangerment. Mattingly and fellow officer Myles Cosgrove were not charged.

Watch more of the interview via ABC here.