In spite of a brain hemorrhage that put him in hospital a month ago, Bret Michaels got the Donald’s "You’re hired!" — winning this season’s "Celebrity Apprentice."

After weeks of speculation that the Poison frontman might never perform — or perhaps even walk — again, the rock star emerged the last one standing on season three of the reality series. 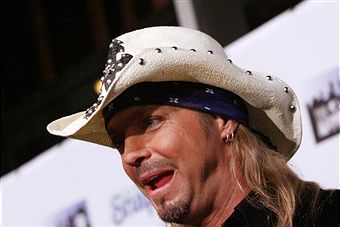 The 47-year old musician, who went to the hospital on April 21 suffering from what was first assumed to be merely a headache, had a noticeable droop on the left side of his face and walked with a limp on the finale. Peete admitted to Trump and the singer that her own son had told her that he was "pulling for Bret."

Michaels, who also looked to have lost quite a bit of weight, was asked by Trump if her was "risking your life being here?" The singer, who was back under medical supervision late last week after suffering numbness on the left side of his body and a "warning" stroke, replied to applause from the studio audience that "lately it seems like me just standing up is risking my life."

Michaels’ victory means $250,000 and a lot of attention was given to American Diabetes Association, his charity of choice. The rock star suffers himself from diabetes and his 10-year old daughter Raine is borderline with the disease.

After gaining fame in 1987 with "Talk Dirty to Me," glam band’s Poison’s first hit single, Michaels found a second celebrity life in 2003 as a judge on "Nashville Star" and in 2007 on VH-1 as he looked for love among the spandex and silicone of dating show "Rock of Love with Bret Michaels."

Michaels has a new album out "Custom Built" out on July 6 and a preview of his new reality show "Bret Michaels: Life As I know It"  on VH-1 on May 30. However, while the preview is still on the schedule, the cable network announced last week that work on the show has been suspended because of Michaels’ health.

The rocker will be making a victory lap on "Today" and "Regis and Kelly" on May 24 and visiting "The Tonight Show" on May 25.