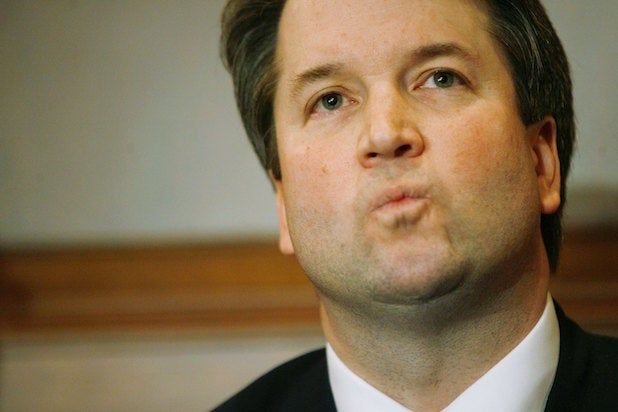 People have expressed their outrage over a letter to the Senate Judiciary Committee in which 65 women testify that Supreme Court nominee Brett Kavanaugh is a “good person.” The letter, released Friday, came after a women, who remained unidentified, accused Kavanaugh of forcing himself on her sexually while he was a student at Georgetown Preparatory School, an all-boys school in Bethesda, Maryland.

Hollywood figures, including Whitney Cummings and Judd Apatow, argued that the letter from 65 women defied  logic. Cummings wrote, “You can treat 65 women with respect and still sexually assault a woman who wasn’t one of those 65 women.” The comedian and creator of CBS’ “2 Broke Girls” added, “Is this actually confusing to people?”

Apatow used fewer words to make his point: “Cosby was really nice to Oprah. So ?” he added to his retweet of Cummings’ post.

Cosby was really nice to Oprah. So ? https://t.co/uiauUbGiNn

Comedian Matt Oswalt, younger brother of Patton Oswalt, penned a hypothetical situation in which Kavanaugh reaches out to the women who signed the letter:

Other observers expressed similar sentiments on Twitter about the letter. Many emphasized the coincidence of Republican Sen. Chuck Grassley, who released the letter, having it at the ready and publishing it after the news of the accusation of sexual misconduct against Kavanaugh broke. Some suspected that Grassley knew of the accusation and prepared for its fallout.

“Who among us does not have a ready-made list of 65 women to say you did not rape them in high school,” writer Kate Aronoff said.

“Will and Grace” star Debra Messing echoed the thought:

#BrettKavanaugh went to an all boys high school. Interesting how quickly you got 65 names. It’s almost as though you KNEW about this accusation of sexual assault and tried to hide it. But got prepared with names JUST IN CASE. https://t.co/DAsORfseGn

“A woman has said he raped her in high school.”
“This list of 65 women from his high school say he’s great.”
“Wait, why did you have that list?”
“No reason."

1/ This. Regardless of how all this falls out, the fact Grassley had a list of 65 women from Kavanaugh's high school as character witnesses LINED UP is literally the biggest, dumbest tell that they knew this was coming down the pike. Even wait until Monday, for chrissake. https://t.co/opKijAUBmj

Let's pause to appreciate what a complete idiot @ChuckGrassley is.

By releasing the "65 women say Kavanaugh is not a rapist" letter within minutes of Farrow's story breaking, he proved beyond all doubt his committee sat on the allegation, and planned in advance to cover it up.

1. That letter from 65 women who say Kavanaugh did not sexually assault them?

It's a common tactic.

We've seen this movie before.

The fact that GOP is embracing it is telling.

The letter begins with the women stating that they have known Kavanaugh for more than 35 years and that “he has behaved honorably and treated women with respect” the entire time. Addressed to Grassley and Sen. Dianne Feinstein, it was released just after a New Yorker story was published detailing the accusation against Kavanaugh.

The New Yorker’s Ronan Farrow reported that the letter made its way to Feinstein’s office in July, but that the senator did not notify Senate Democratic colleagues about it, stating that “the incident was too distant in the past to merit public discussion.”