The barometer-esque index suffered more than a 600-point drop on Friday, following the British vote to depart the European Union — aka the “Brexit.” The decision immediately sunk the value of the Pound, and didn’t do the Euro any favors either.

Below is a look at the past five trading days for the DJIA. The damage obviously only comes from two of those heavy sell-off periods, but the other 72 hours are good for added perspective. The actual drops are indicative enough of what most of the stock market has been seeing since the landmark U.K. vote. 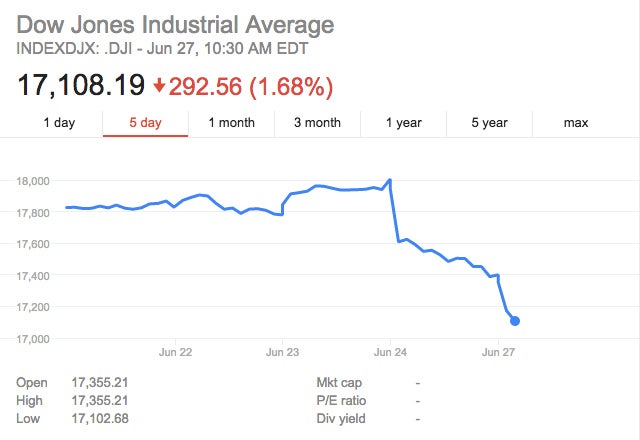 Certain stocks are getting hit harder than others, of course. In the media company world, Discovery, Fox, Apple, Disney and other highly global organizations are suffering a particularly tough time these days, in terms of valuation. Click here to see how some of those publicly traded stateside-based corporations faired in the early going of a scary Friday.

Of course, the local U.K. companies found an even more volatile market awaiting them after the shocking decision. Check out some of those initial drops here.

The British pound has fallen to its lowest valuation in decades as a result of Brits voting to exit the European Union (aka the ”Brexit“). Overseas-based media companies and index funds are among the hardest hit. We’ve used 5-day snapshots illustrate the sudden drops.