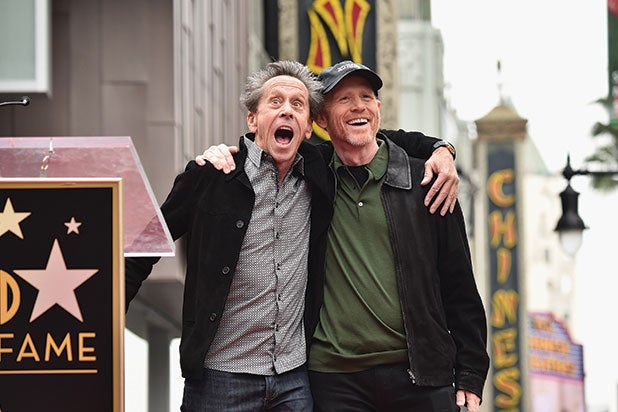 Brian Grazer and Ron Howard are just two of the A-list filmmakers supporting Sean Parker and Prem Akkaraju’s Screening Room, a proposed service to offer new movies in the home for $50 on the same day they hit theaters.

“When we met Sean and Prem last year it was clear Screening Room was the only solution that supports all stakeholders in the industry: exhibitors, studios and filmmakers,” Grazer and Howard said in a statement. “The SR model is fair, balanced and provides significant value for the entire industry that we love.  We make movies for the big screen and for as many people to see it. Screening Room uniquely provides that solution.”

Other announced supporters include Steven Spielberg, Peter Jackson, J.J. Abrams, Martin Scorsese, Frank Marshall, many of whom serve as advisers to Parker’s nascent business and are believed to have a stake should it succeed.

Most exhibitors remain opposed to the idea, and studios aren’t quite sure what to make of it given their different business models and what many have described as a relatively low price point.

Backed by Parker and Prem Akkaraju, Screening Room proposes that consumers watch new movies over a 48-hour window beginning the day of its theatrical release via a set-top box that would cost roughly $150.

According to the proposal, theater owners and studios would collect as much as $20 each of the $50 fee for a new movie. But there’s that mysterious phrasing that Hollywood knows all too well — “as much as.”

Recognizing that theaters count on concession sales to make money, Screening Room plans to provide customers with two free tickets to see the movie in theaters.

Peter Jackson had previously rejected a similar concept. In 2011, Jackson and nearly two dozen other directors penned a letter objecting to studios’ deal with DirecTV to shrink the theatrical release window, which, they believed, would threaten the theatrical business.

On Sunday, Jackson sent a statement to TheWrap explaining his support of Screening Room. In it, he said, “I had concerns about ‘DirecTV’ in 2011, because it was a concept that I believe would have led to the cannibalization of theatrical revenues, to the ultimate detriment of the movie business. Screening Room, however, is very carefully designed to capture an audience that does not currently go to the cinema.”

He added, “Screening Room will expand the audience for a movie – not shift it from cinema to living room. It does not play off studio against theater owner.  Instead it respects both, and is structured to support the long term health of both exhibitors and distributors – resulting in greater sustainability for the wider film industry itself.”