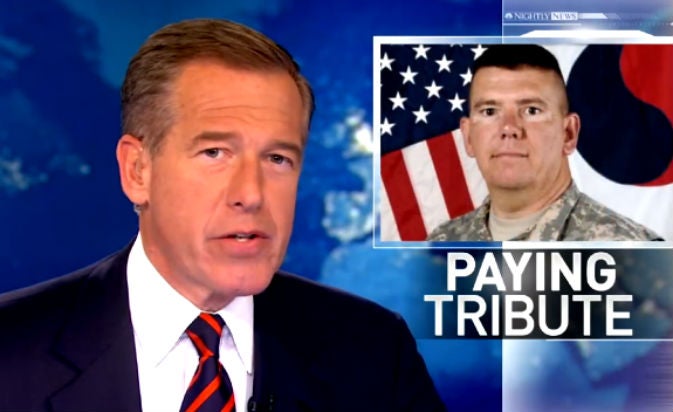 In the face of much incoming fire, Brian Williams couldn’t muster up the admission to his bosses that he lied about being shot down by RPG fire in an Iraqi helicopter, Vanity Fair reported.

“He couldn’t explain what had happened. [He said,] ‘Did something happen to [my] head? Maybe I had a brain tumor, or something in my head?” the magazine reports Williams said right before he made what critics called a half-hearted apology on air.

Williams had aparently also gone rogue on NBC News’ PR department, who thought he would be talking to Stars and Stripes—the military outlet that broke the Iraqi helicopter story—off the record to see what they’d be writing: instead, he went on the record to admit he had been stretching the truth for years.

Beyond the nightmare Williams scenario, the story goes into the downfall of NBC News since Comcast took over:

“When Comcast took over, they had the No. 1 morning show, the No. 1 Sunday show, and the No. 1 evening broadcast,” a former top NBC executive. “That’s all completely fallen apart. I don’t know how you blame anyone but Comcast and the people it brought in. It’s been a nightmare.”

Inmates have been running the asylum in the news division, according to the report, and one of the chief culprits for letting things get out of control has been NBC News President Deborah Turness.

Another insider gave Turness more benefit of the doubt: “Look. Deborah Turness: I have seen no evidence she knows what she’s doing, but in fairness, she walked into a complete shitstorm there,” says a former top NBC executive. “Today is a horror show. Brian Williams? He didn’t give a rat’s ass what Deborah Turness says. But this is fundamentally not a Deborah Turness problem. She’s just a symptom of the problem…. This is a Comcast problem.”

Another insider laid some of the blame on NBCUniversal CEO Steve Burke, who has done a lot of good things, but struck out in the NBC News area: “But what you’re looking at here is his mistake. Just a huge mistake. I mean, bringing in Pat? Then Deborah? That’s like bad food and small portions.”

And other NBC News “loyalists” placed a lot of the blame for the nonstop rumors and incoming fire on departed executives: CNN’s Jeff Zucker and CBS News’ Steve Capus, who both previously served as NBC News president.

“We know the people saying these things about us, and we know why,” one NBC partisan told me. “Because five years later we are still cleaning up the mess they left behind.”