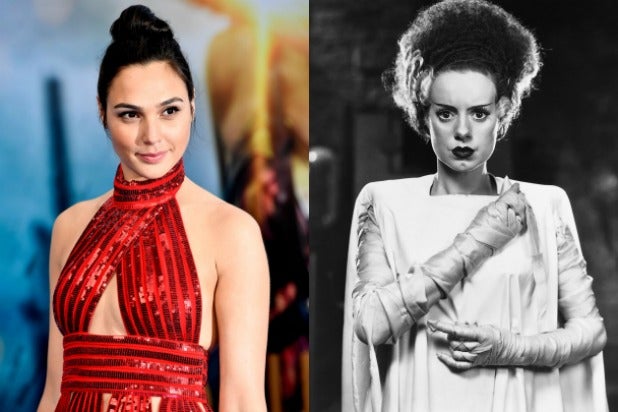 Director Bill Condon already has his next “Bride of Frankenstein” in mind if Angelina Jolie splits up with the delayed project — and it’s “Wonder Woman” herself, Gal Gadot, insiders tell TheWrap.

Universal announced Thursday that it has pulled the film from its schedule, raising questions about the future of its troubled Dark Universe concept, which is to revive classic movie monsters. It hit a snag when Tom Cruise’s “The Mummy” proved a box-office disappointment this summer.

Javier Bardem and Jolie have been previously attached to “Bride of Frankenstein,” but insiders tell TheWrap that neither actor has a deal locked in. Condon and the other filmmakers have been in a holding pattern waiting for Jolie to commit to the project or pass. The filmmakers have not reached out to Gadot, who like  Condon, is repped by WME.

But they are trying to save the fledging Dark Universe franchise, starting by getting “Bride of Frankenstein” back in business. Universal and Condon announced Thursday that the film would no longer come out on its planned released date, Feb. 14, 2019.

“This is fairly out of nowhere given how deep they were into prep over there, but not really surprising — their mandate has more or less been that they wanted these to work as PG-rated action movies/theme-park rides, not horror movies,” said an insider. “Basically ‘Fast and the Furious’ meets ‘The Avengers’ – but with super monsters. “

Added another insider, “You just assume they’d throw out a lot of that thinking out after ‘The Mummy”s’ Rotten Tomatoes score, but it doesn’t seem like it.  Makes you wonder if they’ll ever get those (Universal Monsters) right. Why is it so hard for them?”

Reps for Gadot, Jolie and Bardem did not immediately respond to requests for comment, and a Universal Pictures rep declined to comment.

On Tuesday, Condon said in an interview with Collider that he was not focused on how “Bride of Frankenstein” will tie into the Dark Universe.

“I will tell you this — what I’m doing is 100 percent making a really good monster movie. It has nothing to do with anything else. Nothing. Zero.”

Universal plans for the Dark Universe to be connected by a mysterious organization called Prodigium that seeks to protect humanity from evil monsters. Prodigium is led by Dr. Henry Jekyll (played by Russell Crowe), who appeared in “The Mummy.”