“Bridgerton” Creator Chris Van Dusen has lined up a new project — writing the television adaptation of “They Both Die at the End” at eOne.

Van Dusen will write the series with the book’s author, Adam Silvera. He will also serve as executive producer through his company CVD Productions.

“They Both Die at the End,” a YA novel released in 2021, follows the story of two people whose lives change over one day.

The synopsis of the book reads: “On September 5, a little after midnight, Death-Cast calls Mateo Torrez and Rufus Emeterio to give them some bad news: They’re going to die today. Mateo and Rufus are total strangers, but, for different reasons, they’re both looking to make a new friend on their End Day. The good news: There’s an app for that. It’s called the Last Friend, and through it, Rufus and Mateo are about to meet up for one last great adventure — to live a lifetime in a single day.” 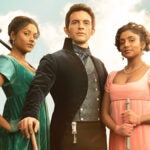 Also Read:
‘Bridgerton’ Season 2: The Game Is On in New Character Posters

eOne is the studio behind the project and will distribute the show globally.

In addition to serving as showrunner for “Bridgerton” Seasons 1 and 2, Van Dusen’s was an EP for “Scandal” and “Grey’s Anatomy.” He is represented by Literate Management and The Nord Group.

Silvera is represented by UTA and Jodi Reamer at Writers House.

eOne is part of the Hasbro company.