“Bridgerton” family matriarch Lady Violet, and the clan’s patriarch – her son, Viscount Anthony – had some deep trauma to unpack in Season 2 of the Netflix series.

In a finale scene that no doubt left viewers weeping on a global scale, Violet, played by Ruth Gemmell, told her son that Kate was awake. But when Anthony said he didn’t think he could go see Kate, who was left unconscious following a fall from a horse, Violet finally found a way to break through to her son’s emotional core — something she’d been trying to do all season — by convincing him that true love is worth it. So, he did go and see the woman he loved, opening the door to a happy ending for Anthony and joy for his proud mother.

In the finale, Violet also apologized to Anthony for everything he had to go through when his father, Edmund, died and he was thrust into the Viscount role, as she was grief-stricken, and Gemmell also told TheWrap that the heart-wrenching scene resulted from an earlier conversation the mother and son had in Episode 3, “A Bee in Your Bonnet.”

“[In that episode], when they’re sitting by the side of the grave, she realizes, I think he says to her, ‘You were barely there,’ and I think probably more than any other moment she realizes the weight of the family, and sense of duty, and becoming head of the household – which would have meant far more then than it probably means now, not only weighs very heavily on him, but has probably stunted his growth in a way. He has been trapped in what he sees as his role and that is it,” Gemmell said. “And I think she understands the pressures that were put on him. I don’t think perhaps she would have behaved any differently. When you’re in the throes of grief, I don’t think you would know how you react or anything like that, but she understands the consequences of those actions or inactions or whatever. And I suppose the apology [in the finale] is just a kind of a [way] of trying to allow him to move forward.”

Lady Violet’s comments to her eldest child about the infinite rewards of true love, despite the brutal loss she lives with every day, are her way of encouraging her son to follow his feelings, when he doesn’t think he can.

“And as soon as she hears that, she realizes she has to take the reins and allow him to move forward,” Gemmell added. “I mean, they’re all stages of grief, aren’t they, the way she behaves. They talk about seven stages of grief and they’re absolutely true. You can’t take any shortcuts. You have to go through every single one.”

Asked about her preparation for the scene, Gemmell explained her process is to go off the words on the page.

“And for me, if it’s not in the words, then it doesn’t necessarily exist because it doesn’t necessarily exist for an audience. It doesn’t mean that I think that’s the right way, it’s just what works for me. I also think that the atmosphere on set, for me, makes working on a scene — the way I work on the scene — vital. So, it was a happy set, so therefore I felt held and trusted and I felt trusting of everyone around me. So, you can mess up, but it doesn’t matter and you can start again and all of that kind of stuff. So that’s how I like to work,” she continued. 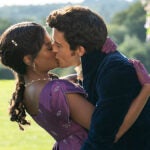 And being paired with Jonathan Bailey for that touching finale scene (and all those other Violet and Anthony moments throughout the season), Gemmell said was “wonderful” (he in turn called working with her “incredibly special”).

“Working with Jonny was wonderful because he’s such an instinctive actor and he’s a very charismatic actor, and he’s extremely generous,” she said. “We enjoyed working together. And also those scenes, they’re always more exciting for actors, aren’t they, when there’s something that shows a bit of human frailty and delving into somebody’s vulnerability.”

The finale scene also required an understanding of grief. And according to “Bridgerton” executive producer, Chris Van Dusen, who calls Gemmell and Bailey “powerhouse actors,” it was “really powerful” moment to watch being filmed.

“I can’t think of anyone that I know that hasn’t experienced grief, and how that ravishes you and how it is all-consuming,” Gemmell told TheWrap. “So, I suppose self-indulgently I quite enjoy getting to expose my vulnerable side, about what I know about grief and I suppose that’s how I tackle it. Jonny and I did run over our lines together because you want to be able to be on top of them so that you can riff on it really. Not the words but the way we play and then someone comes along and tells you how they want to film it and then you have to adapt it, but for me, it’s about the trust in the room, and what you want to say, and a gift of a scene like that means you’re able to.” 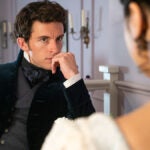 The final seconds of the scene followed the camera as it panned down between Gemmell and Bailey, to focus on their hands clasped together. And the touching gesture came about on the day.

“I think we did that. I think they wanted it to be close. And I think in a very practical manner, my corset made it rather difficult to get any closer,” she explained. “They’re really hard to relax in.”

While Gemmell certainly had her share of tear-your-guts-out style moments to create mostly alongside Bailey in Season 2, there were also some of pure joy. For example, after the Bridgertons decided to hold a ball with the Sharmas to stave off gossip from the ton after Anthony and Edwina’s (Charithra Chandran) failed marriage, and after no one came, the two families danced like no one was watching.

“It’s the first time I got to dance,” Gemmell shared. “I’d really love to dance in one of the balls. … Yeah, we did that and it was mayhem. Anytime the family gets together we [laugh] a lot. It descends into utter chaos. I’m sure they find it really difficult to film us because we’re always a mess, and then that one in particular was hilarious. I think certainly by the end, having done it several times, Adjoa [Andoh, Lady Danbury] and I couldn’t speak anymore. It was very funny. And there was one point I made a mess of it completely. I  turned the wrong way. I was doing all sorts of things in a loop. Luke Thompson, who plays Benedict, was kind of throwing me around the room. It was a disaster but a lot of fun. Probably a really lovely outlet for us after a long run of it.”