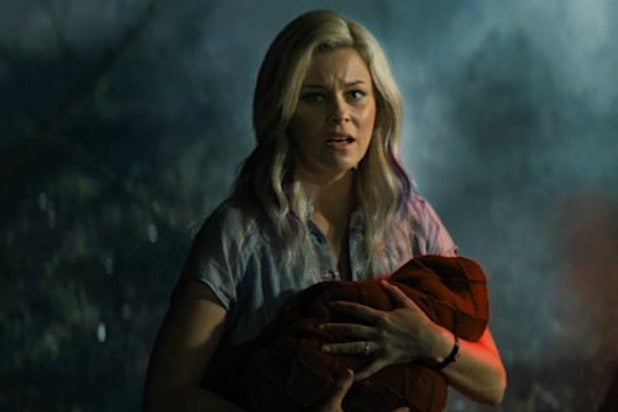 The reviews are in for the James Gunn-produced horror flick “Brightburn,” and while some critics enjoyed the film as a dark alternative to the Superman origin story, others pointed to its “shockingly predictable” story.

“What if Superman started out evil? And what if that was the only idea you had for your movie? Hence ‘Brightburn,’ a wafer-thin exercise in a supposedly new genre called ‘superhero horror,’ but what is really just a body-count flick haphazardly grafted onto a tweaked version of Superman’s origin story — except this version’s isolated farm boy with indestructible (and destructive) alien powers would rather lift a car not to rescue someone but to kill a grown-up who wasn’t nice to him,” TheWrap critic Robert Abele wrote in his review.

“Brightburn” is directed by David Yarovesky and stars Elizabeth Banks as a mother who adopts an alien child (Jackson A. Dunn) that crash- landed near her rural home, similar to the Clark Kent story we’ve come to know.

“Brightburn” currently has a 64% on Rotten Tomatoes, with critics divided on how the film portrays Brandon’s evolution into a cold-blooded supervillain. The Guardian critic Benjamin Lee said in his review that Yarovesky did “extraordinary things with a minuscule $6m budget,” although he thought the film could have further explored Brandon’s “internal wrestle between good and evil.”

On the other end, IndieWire’s Kate Erbland wrote in her piece that “Brightburn” relied too much on typical horror story beats and tropes, despite its ambitious intentions. “Soon enough, it’s just another scary movie with a nutso bad guy burning stuff down and looking freaky while doing it, and that’s something we’ve all seen before,” she wrote.

The film marks Banks’ rare turn in the horror genre. In his review in CinemaBlend, Eric Eisenberg said he bought into Banks’ character unconditionally loving her child despite his increasingly devious, dangerous antics.

“‘Brightburn’ is further benefited by having a really fantastic cast that delivers the needed performances for the story to have the impact that it’s seeking,” he wrote in his review. “At the same time, the extreme conflict in their evolving situation with Brandon requires some big swings, and the pain and hurt is palpable in their performances. “

Others, like AV Club Jesse Hassenger, weren’t impressed with the role Banks and her film husband, played by David Denman, had to assume in the first place. “Banks and Denman are playing roles telegraphed so early that they lack any sense of discovery, with their spot-on semi-cool-parent costumes (flannel for him, dyed hair and faded rock-and-roll shirts for her) doing most of the work.” he wrote.

Hassenger added, “But any attempts to obscure where the movie is headed are weirdly pointless, especially for a movie that goes heavy on the rumbling-score portent from the jump. For such a specific, clever-on-paper idea, ‘Brightburn’ follows a shockingly predictable turn of events, possibly because it has few reference points beyond other pop-culture stories.”

See some of the other reviews below:

The truth of what lurks beneath the floorboards turns out to be of no particular consequence–not exactly a red herring, just a bit of hogwash that confirms Brandon to be a gene splice of Damien and Superman. Maybe a sense of majesty, of mythic grandeur, might have made him feel as if he was less arbitrarily willed into being, though Yarovesky certainly conveys the weight of the kid’s killing spree. Not its existential weight, only its repugnant force.

Casting Superboy as the monster is a slasher movie is quite a fun idea, and screenwriters Matt and Brian Gunn managed to make an effective and welcome low-budget horror thriller that may provide some sardonic relief after the frenzy of earnestness that was Man of Steel. If you thought Zack Snyder was dark…

By the end of “Brightburn,” a winningly scary riff on the Superman mythos, we get a definitive answer to that question. The details of Superman’s origin are so ingrained in pop culture they’re rarely questioned, but dwell on them for even a second and the story becomes completely deranged.