It is possibly of one Americans’ more endearing qualities that they think Britons are articulate and cultured; myths the British have not exerted themselves dispelling.

For most Americans, Britain is something experienced through those nice "Masterpiece Theatre"-type shows we export. British TV still dines out on the glory days of "Brideshead Revisited" and "The Jewel in the Crown," which are often cited as the type of quality for which we are famous — yet they were made a generation ago. 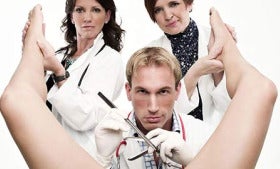 Here in Britain, TV pundits frequently cite "The Wire" and "Curb Your Enthusiasm" as brilliant and innovative rather than anything home-grown. Rather than presenting taste and refinement, British TV excels in the art of barrel scraping.

Despite having only 60 million people, Britain has five main networks (BBC 1 & BBC 2, ITV, Channel 4 and Channel Five, as well as a multitude of satellite and digital viewers. The BBC is funded by a compulsory license fee and the rest battle for advertising, or subscriptions in the case of satellite. The other day it was revealed that TV advertising had been overtaken by online in the British market, so the commercial prospects are even bleaker than was supposed. It’s probably true that British TV’s artistic quality thrived in the old days of only three terrestrial networks.

The main difference between British and U.S. viewing habits is that the type of programming Americans call daytime TV is what we call primetime TV. Rather than wordy and brilliant dramas or perfectly timed comedies, the peak schedule of Britain is soap-opera overload, complemented by a smattering of real crime and cops on the beat.

In the last week of August, an episode of "Motorway Cops," a-camera-in-the-patrol-car trip down Britain’s freeways, was the third-rated program for the week on BBC 1, the flagship channel. This was a special episode of "Traffic Cops!" We prefer watching drivers being scolded about a child safety seat over Shakespeare.

The soaps that dominate British broadcasting are the BBC’s "EastEnders," set in a fictional part of London, and "Coronation Street" — fictional Manchester — from the principal commercial network, ITV. The ratings are well down from their peak these days, as the British audience is splintered like any other. Still, they’re amazing. During the summer months they attract about 10 million viewers, rising to about 12 million in winter. Britain’s population is about a fifth of the U.S. count, so you can imagine what an American network executive would give to have "All My Children" being guaranteed 60 million viewers four nights a week!

The ITV network has retreated from a plan to go upmarket and now swamps its nightly schedule with "Emmerdale" and "The Bill" (often well acted) to keep "Corrie" viewers. So it has, purposefully or otherwise, built a commercial network around the viewers advertisers want least, hence ITV’s ongoing plight.

This is why the vast majority of British productions seen in the States are miniseries and short-run dramas, some of which like "State of Play" and "Traffik" become movies. But even when programs like these win viewers, they still play second fiddle to our beloved soaps. Long-running shows like "Midsomer Murders" and the various incarnations of "Miss Marple" only get middling ratings.

What we have excelled at are those ghastly reality shows, which surely are conclusive proof that the Britain of reserved, standoffish people was also a fantasy we cherished.

The queue of Britons, devoid of decorum and any sense of self, willing to display their acquisitiveness and success on property-related shows is endless. These often have spinoffs about Britons buying property abroad. There is also an enormously popular seam of programming about Britons fleeing for Australia, or, frankly, anywhere. Many of these are broadcast in a peak slot. There are enough property shows to house the homeless and enough cookery programs to solve world hunger.

We also have an appetite for watching our countrymen, and women, assaulting each other on our drunken streets. The variation here being Britons on holiday, fighting and vomiting their way around the Mediterranean.

If those guardians of American modesty at the FCC were to decamp to Britain they would probably collapse with exhaustion chasing the vulgar fare. I’m sure they would view the pensioners on "Bus-Pass Boob Job" as purveyors or niche pornography. Would they see much medical value in "Embarrassing Illnesses" where, we are to believe, patients tortured by shyness suffered in silence until a TV crew was dispatched and their genitals were suddenly ready for their close-up. This is primetime TV courtesy of Channel 4, which was once the network behind the boom in British film and is now in crisis of its own making.

Whatever the format, it is copied, and flogged to death, by the originator as well as the imitators on other channels. The things my countrymen are watching frequently astounds me. A recent example is "Hotel Rescue," where we can watch so-called experts chastise sloppy proprietors. This banal idea was pilfered by Five, the newest of the terrestrial networks, which gave us "Hotel Inspector." They are broadcast at 8 p.m. and 9 p.m. respectively.

The BBC, due to its public service remit, tries to walk a tightrope of populist shows that are not mired in tackiness. With its inherent middle-class leanings, the BBC has swamped its main channel with silly, syrupy shows like "Cash in the Attic," "Bargain Hunt," and "Sun, Sea and Bargain Hunting,"  which is essentially the latter with an excursion to the Continent.

Even during peak viewing the BBC milks ideas like its commercial counterparts. Two hospital soaps, "Casualty" and "Holby City," are an indispensable part of its schedule. "Holby Blue" was a spinoff about police who took casualties to the hospital and "Casualty 1907" was a self-explained act of desperation.

Globally, the BBC is enormously respected but at home it is in deep trouble. It has recently become the target of the Murdochs, who resent its vast expenditure on its websites, especially news.

An particularly obnoxious episode still plagues the BBC. J Jonathon Ross — who has an £18M deal with the BBC for doing very little, and none of it well — and Russell Brand — who gives shallowness a bad name — broadcast an a predictably adolescent radio show so typical of the oafish celebrity behavior that feeds our infamous tabloids. This helped the BBC expose itself to attacks and criticism from all quarters, and sealed the suspicion that it is cosseted and detached.

Despite the constant generosity of American award-conferring bodies it is arguable that the most prominent entertainment export in the U.S. market is Simon Cowell. That’s good for Simon Cowell but bad for everybody else. But even that is not sustainable. He has benefited immensely by producing talent programs that produce fleeting stars while undermining the music business of the conglomerates that control most TV networks.

The sensationalist nonsense that is destroying scripted work dellivers profits and strong ratings in the short term, but the golden goose has been captured — and it has stopped laying.