Britney Spears, fresh off the news that her father plans to step down as her conservator, got candid with her 33.3 million Instagram followers Friday about another subject she’s sensitive about: her weight.

The post that may not have been exactly what fans were expecting amidst the star’s headline-making conservatorship battle, but she was honest nonetheless. Noticing that her face has slimmed down, she confesses that earlier this summer when she was looked “heavier…I think I was happier !!!!”

“It’s really weird whenever I try to slim down it usually starts with my legs ?? first … then my stomach … then my face ??‍♀️ … and that’s when I know I’ve actually lost weight !!!!” Spears’ caption read. “When you swipe to the second pic you can actually really see how slim my face is but I’m not so sure I like it ??‍♀️??‍♀️??‍♀️…”

The photo is a close-up of Spears’ face featuring her bare shoulders, as well as her signature black eyeliner.

“In the old days when women were heavier they were considered more attractive to men because it was a sign of wealth !!!!” she continued. “I have a couple of throwback dances ?? from this summer where I looked heavier but it’s weird cause I think I was happier !!!!”

Spears apologized for her “shallow talk of weight,” but wrote, “it is what it is you know,” adding a few virtual shrugs. 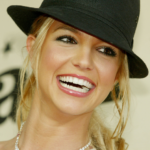 The “Toxic” singer’s clean lifestyle has been well-documented on her Instagram, often posting videos of herself working out or dancing. In May, she revealed she’d felt the need to step up her health and fitness game to keep up with her personal trainer boyfriend Sam Asghari.

The following month, it was clear that her body image was still in a shaky place due to the paparazzi manipulating photos to make her appear larger.

Posting a video set to Lily Allen’s “F— You,” Spears slammed the “rude and mean” paps. “Not only do they take my picture … they distort my body and mess with the image,” she said. “I know my body is not perfect but I definitely do NOT look like how they portray me,” before kindly inviting them to “f— off.”

Although her most recent post implies she is a bit conflicted about the state of her body, the comments were flooded with support from fans reminding her that she is “perfect” as is, with one user aptly putting it, “Girl you are THEE Britney Spears. Who cares what men think !! ?❤️”

Also Read:
Britney Spears Says She Won’t Perform Again as Long as Her Dad Controls ‘What I Wear, Say, Do, or Think’
x