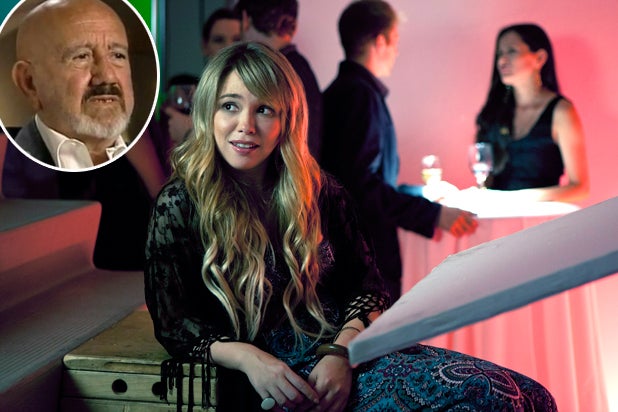 Murphy’s father, Angelo Bertolotti, has expressed his unhappiness over the movie and has since entered into a bitter online feud with the actress playing his daughter, Amanda Fuller.

Some in the press, Amanda Fuller (Update)” href=”https://www.thewrap.com/brittany-murphys-dad-is-cyber-bullying-lifetimes-biopic-star-amanda-fuller/” target=”_blank”>including TheWrap, has characterized Bertolotti’s tweets and retweets about Fuller as cyber bullying. In turn, Bertolotti says that Fuller actually started the feud.

“Amanda Fuller attacked my daughter, Brittany Murphy, as well as myself and our relationship, which she knows nothing about,” Bertolotti told TheWrap. “She did that in response to one single tweet, where I called her being cast in this film ‘a disgrace.’ I stand by that opinion.”

Also Read: The Deaths of Brittany Murphy and Husband Simon Monjack: A Timeline of Twists and Turns

He later added, “After Amanda Fuller attacked my one Tweet in a long article, I made several other comments about the film. Those are my opinions. I’m entitled to express them. That’s not ‘bullying.’ I’ve also re-tweeted fans, which I’ve done for years. Everyone knows that re-tweets don’t equal endorsement.”

“The Brittany Murphy Story” was produced independently, not by Lifetime, and was meant as a tribute to Murphy, said Fuller. Directed by Joe Menendez, the film was shot over 16 days on a very small budget, and Lifetime bought the rights to air it.

Fuller stars in the movie, which premieres on Saturday at 8 p.m. ET, alongside Sherilyn Fenn as Murphy’s mother, Sharon, who is not connected to the movie either.

The tweets Bertolotti has shared have referred to Fuller, who also stars on ABC’s “Last Man Standing,” as being too fat to play Murphy. Some have suggested that Fuller has used her sexuality to get the role and to garner attention.

“I think it’s appalling that Lifetime not only decided to proceed with an untrue, unauthorized biopic about Britt, but also that they picked this particular actress,” Bertolotti said. “Amanda Fuller doesn’t resemble my daughter one bit, she also mocked her. I saw multiple photos she posted on Instagram, Twitter and elsewhere, bugging out her eyes and sticking out her lips. I also saw photos and videos of this actress in a number of sleazy, overtly sexual movies, full frontal nudity, group sex, etc. That’s unacceptable.

“My Britt was very wholesome,” he continued. “This actress and this movie don’t do my daughter justice. They’re only defiling her memory.”

TheWrap further interviewed Bertolotti via email (as he said that he has lost his voice) about what angers him about the Lifetime biopic, where he stands on his threat to sue over the movie and where the investigation into his daughter’s death stands now.

TheWrap: Can you understand why people would find your comments about the actress unfair and mean?
Angelo Bertolotti: I can understand that people may take offense, based on the media twisting the facts. Amanda Fuller fired on me, in response to a single Tweet. She blamed my daughter for her own death and lied that I was never present in her life. None of that is true. I was never estranged from Britt. She wasn’t insecure or paranoid. She wasn’t abusing medications, which even the Coroner confirmed. She wasn’t taking any illegal drugs. Amanda Fuller had no business discussing my daughter or myself, especially in such a disrespectful way. She doesn’t know the first thing about Brittany or me, after what she described as a two-day pre-production and research. Amanda Fuller started all this, by attacking me in the press. I had to respond and I did, in the Examiner interview and on Twitter.

Have you watched the “The Brittany Murphy Story”? What do you have against it?
I’ve watched enough of it to see that it’s a travesty. In the first five minutes alone, they already claimed that I wasn’t around since she was two years old. I dare anyone who wants to repeat that claim to look through the pictures I’ve posted on Twitter for years. You will see me with her at every stage in her life. I’ve always been close to Brittany, up to weeks before her death, even against her mother’s wishes. Mother wanted Britt all to herself, trying to keep her from friends and family. The media has been claiming all these years that I was estranged, based on Sharon’s claims. Well, Sharon also claimed that Britt’s real father was unknown, on her death certificate. She then claimed that her real father was dead. She lied about many things. I had to go to court to get the death certificate corrected. I didn’t give a damn about the press lying about me, I’ve ignored it for years. But when they besmirch my baby, I won’t stand for it. When I see this so-called “movie” in its entirety, I’m sure I’ll be even more disgusted.

You’ve threatened to sue over the film. Where does that stand now?
Anyone who would make a movie based on tabloid articles has to realize there’s accountability at the end of the day. There’s liability for defamation. I’ll do whatever I have to do to set the facts straight.

See video: The Deaths of Brittany Murphy and Husband Simon Monjack: A Timeline of Twists and Turns

What would be the ideal situation for retelling your daughter’s story?
My daughter’s story should and will be told only after there’s justice for Brittany. Now is not the time. Lifetime is certainly not the venue.

You have presented evidence that has shown your daughter was possibly poisoned. Where does the investigation into her death stand now?
Two independent labs confirmed unusually high number of heavy metals/poisons in Brittany’s specimens. Famed pathologist Cyril Wecht said that murder cannot be excluded. I’m pressing the authorities to investigate Brittany’s and Simon’s deaths. They’ve never done any tests for poisons or toxins. They’ve never questioned a single witness. The media blaming the victims for their own deaths isn’t making this plight any easier. Shame on Lifetime for putting out an untrue story to muddy the waters. Shame on anyone who stands in the way of justice for Brittany. I will keep moving forward and I will also continue to speak my mind.

Editor’s note: This interview has been edited for content and style.