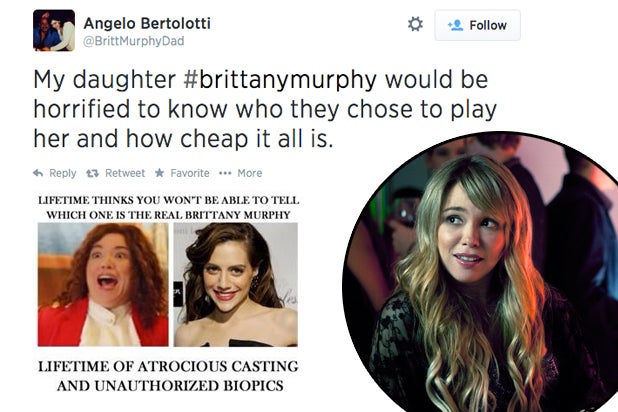 Late actress Brittany Murphy‘s father, Angelo Bertolotti, has directed his anger over Lifetime’s upcoming biopic about his daughter toward the actress portraying her, Amanda Fuller.

Angelo Bertolotti, who has threatened to sue over the movie, has been tweeting and retweeting dozens of comments referring to Fuller as being too fat to play his daughter and calling the actress a “floozy,” among other insults.

“My daughter #brittanymurphy would be horrified to know who they chose to play her and how cheap it all is,” he tweeted.

“He can say what he wants,” she told the site. “He has already gone and attacked me on Twitter and I have had to block him and that is fine. He can do what he wants. But I just think it is interesting that the minute she is back in the press he is all about, ‘I am going to sue’ and all that stuff. If he really respected his daughter’s memory then I don’t know if he would be trying to make all this controversy about it. Let her rest in peace.”

Fuller revealed that “The Story” was produced independently, not by Lifetime, and was meant as a tribute to Murphy. Directed by Joe Menendez, the film was shot over 16 days on a very small budget, and Lifetime bought the rights to air it.

“It is what it is,” Fuller said. “All of our hearts were in the right place. I had two days to prepare.”

“I would have loved to have months of preparation and time to get down to a really skinny [body] so I could portray her physically better,” she continued. “And we would have loved to have had more money and more time for vocal lessons and stuff like that. But in the end, I think it became less of it being a look-alike piece and more about just trying to capture the essence of who she was.”

Bertolotti responded to TheWrap’s article via Twitter: “If you’d followed from the beginning, you’d know that Amanda attacked me in article after 1 tweet saying disgrace,” he tweeted.

Fuller stars in the movie, which premieres on Saturday at 8 p.m. ET, alongside Sherilyn Fenn as her mother, Sharon, who is not connected to the movie either.

Murphy first made a big splash in “Clueless,” which led to starring roles in “Just Married,” “Little Black Book,” “Girl, Interrupted” and “8 Mile,” among many others.

She died in 2009 from what the coroner ruled as an accident caused by a combination of pneumonia, an iron deficiency and “multiple drug intoxication.” Four years later, Bertolotti, Murphy’s off-and-on estranged father, came forward with evidence claiming that his daughter had been poisoned.

See some of Bertolotti’s tweets and retweets about Fuller below: