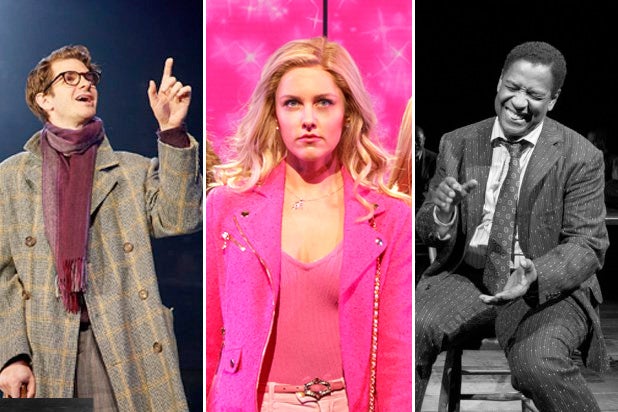 The majority of Broadway ticket buyers may be women, but there continues to be a definite gender gap on stage.

Actresses accounted for just 37 percent of the 233 principal roles in the 30 new shows mounted on Broadway last season, according to a study released Monday by the digital Broadway production resource ProductionPro.

The dearth of onstage women comes despite the fact that there were a number of female-dominated productions this past season, including “Edward Albee’s Three Tall Women,” the Tina Fey musical “Mean Girls” and the Donna Summer musical “Summer” (which even features female chorus members playing male roles).

But male-skewing productions like the Denzel Washington revival “The Iceman Cometh” and the Andrew Garfield-topped “Angels in America” continued to be the order of the day.

And the new 2018-19 season looks to be no improvement: The first show, which opened last week, is a starry revival of the 1968 comedic drama “The Boys in the Band” that boasts nine roles — all of them male.

The gender gap is even worse behind the curtain, according to ProductionPro: A woman directed only 19 percent of the 20 new plays and 10 musicals that opened between May 22, 2017 and May 27, 2018. (Female writers fared even worse, at just 16 percent.)

Women did better in some of the more traditionally gendered craft positions, according to the organization’s tally: They accounted for 67 percent of the makeup designers, 54 percent of the costume designers and 53 percent of the stage managers.

And in one area of improvement over recent years, 40 percent of the music directors this year were women.

The organization noted that the season included 30 new productions, 10 of them musicals, running for a total of 74 hours, 31 minutes.

The average ticket price for a musical was $105.32, while plays on average cost $93. (According to the Broadway League, 13.3 million people attended both new and long-running shows last season on Broadway — producing a record $1.45 billion in box office grosses.)

The best value, according to ProductionPro, was the 12-fold Tony nominee “SpongeBob SquarePants: The Musical,” whose average ticket price worked out to just 46 cents per minute.