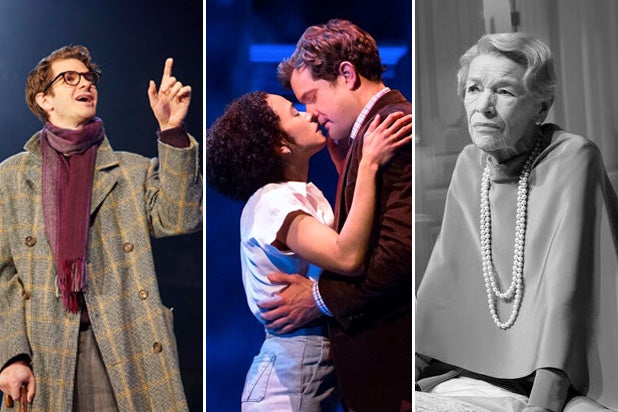 It is pre-Tony nominations season and among the hopefuls on Broadway are: “Angels in America,” “Travesties,” “Lobby Hero,” “Carousel, “My Fair Lady,” “Once on This Island,” “Three Tall Women,” “The Iceman Cometh,” “The Boys in the Band,” “Children of a Lesser God,” and “Hello Dolly!” Wait — isn’t this 2018?

Yes, those are all new productions of old shows and yes, we are living in politically correct times. But for the most part, this season’s revivals manage to feel downright relevant.

While the plays are not being rewritten, there is some reimagining going on. Hal Luftig, the lead producer of the new “Children of a Lesser God,” says the 1980 drama is no longer just about a deaf girl and her male teacher, but about the larger issue of how we may be “connecting” more but communicating less. “I really think we’ve stopped listening to each other,” says Luftig. “It’s why we missed the Black Lives Matter importance, not to mention why the election turned out as it did.”

Likewise, “Travesties,” the Tom Stoppard play last seen on Broadway in 1976, is, according to director Patrick Marber, “about a time when the world is in crisis. It is tragic and farcical and what could be more timely?” “Boys in the Band” and “Angels in America” took on the gay and AIDS issues when they were hot button. Now, the epidemic is lessened and gay marriage is legal. Does it still resonate?

“Angels” playwright Tony Kushner admits he was concerned about the play’s return, but told the New York Times, “It feels very much of the moment. … There’s all that stuff about the environment and the world coming to an end.” There is also the presence of Roy Cohn (played by Nathan Lane), a character in the play who has come back into the news as a mentor to one Donald Trump.

The #MeToo movement also hovers about Broadway’s current slate of revivals: Luftig says a line that mentioned “rape,” in a humorous way, came out of his show. Many are closely watching the new productions of “Carousel” and “My Fair Lady.” The former centers on a husband who regularly hits his wife. When her best friend asks, “Did you hit him back?” there is now more urgency to the question. (The fact that the husband is played by a black actor and the wife by a white one may blur things uncomfortably for some audiences.)

In “My Fair Lady,” Henry Higgins transforms Eliza Doolittle and wonders why women can’t be more like men. Just how will the 2018 Eliza respond to that show’s last implied demand: “Eliza, where the devil are my slippers?” Audiences may be surprised. The new production of Edward Albee’s “Three Tall Women,” on the other hand, debuted in 1991, but hits very close to home with lines like, “We cheat because we’re lonely, they cheat because they’re men.”

Women, however, have every right to point out that while they fill many of the Broadway stages — not to mention the theaters’ seats — they are still virtually absent as writers and directors. (“Angels” is an exception, directed by Tony winner Marianne Elliott.)

Why are there so many revivals now? First, many of the older shows offered especially meaty roles. That’s one reason why Glenda Jackson, at 81, is appearing in “Three Tall Women,” and what drew movie and TV stars like Denzel Washington, Andrew Garfield, Joshua Jackson and the “Boys in the Band” 50th-anniversary revival’s glittery cast of proudly gay actors to the Great White Way.

Of course, investors are sometimes more eager to lay their money down when the name of the show is already familiar. Though let’s hope they don’t forget the lessons learned from last season’s hits “Dear Evan Hansen” and “Come From Away” — new musicals that weren’t based on well-known movies or TV shows.

“It might be easier because of the known title, but the financial award to the investor does not have the potential that a new hit musical does,” explains Harriett Leve, a successful long-time producer, “because it’s rare for a revival to run very long.”

Bottom line: Revivals are here to stay. “They introduce new generations to the stage,” notes “Razzle Dazzle” author Michael Riedel, “and how can you complain about anything that brings Glenda Jackson back to Broadway?” The challenge, at this politically precarious time, is to not only entertain but to matter. So far so good.