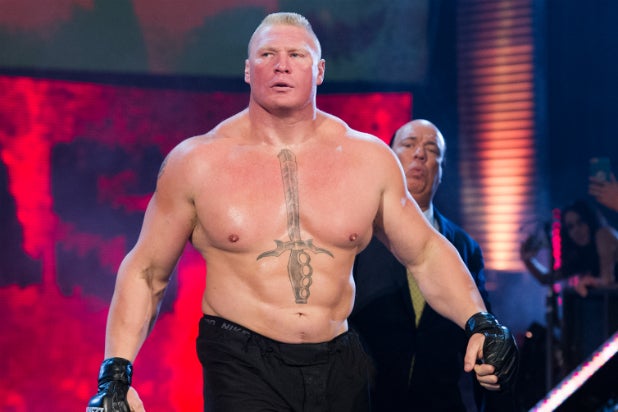 Lesnar won the title last Friday at the hotly debated Saudi Arabia pay-per-view event “Crown Jewel,” when he dominated opponent Braun Strowman. Getting the belt back on Brock appeared to be a last-minute pivot, as WWE had to change plans when top babyface (the pro-wrestling term for a good guy) Roman Reigns revealed his leukemia had returned.

Before Reigns’ (real name Joe Anoa’i) shocking announcement, the middle-eastern match was meant to be a triple threat. Reigns surrendered the belt before taking medical leave, and WWE locked Brock back up into what is believed to be a big-money deal.

A WWE spokesman did not immediately respond to our request for comment on Lesnar’s extension.

Before Reigns’ cancer diagnosis, Lesnar was poised to return to the real fighting world of UFC, likely to take on Heavyweight Champion Daniel Cormier in early 2019. The squared-circle deal now puts those octagon plans in question, though our source tells us that Lesnar’s new agreement with WWE will allow for a UFC fight.

“The Beast” Lesnar has taken advantage of a unique part-time arrangement offered by WWE. Over these past few years, Lesnar doesn’t have the typical WWE Superstar’s grueling schedule, instead fighting just a few times annually. Lesnar has also regularly let short-term contracts run their course, cashing in on his high value with surprise extensions — like this one.

Lesnar had been wrestling in WWE while serving a mixed-martial arts suspension for failing a pair of drug tests leading up to UFC 200. That suspension ends in January.

WWE’s WrestleMania event is essentially professional wrestling’s Super Bowl. It is considered the culmination of WWE’s 12-month season, with the next “season” starting the following night on “Monday Night Raw.”

WrestleMania 35 will take place in the open-air MetLife Stadium in New Jersey on April 7, 2019.