Former NBC news anchor Tom Brokaw and his wife, Meredith, were involved in a three-car accident late Friday that resulted in a fatality.

The Brokaws were driving on New York’s Bruckner Expressway when some stray cable on the road caused them and two other vehicles to lose control of their cars, according to a statement from the veteran newsman. 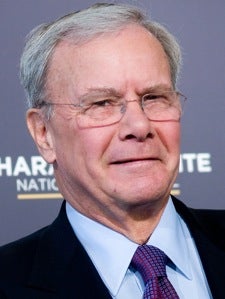 Brokaw and his wife were both unharmed. The driver of one of the cars — a 28 year old woman — was thrown from her vehicle and died.

A mail-truck driver injured in the accident and has been hospitalized.

Here is the full text of Brokaw’s statement:

Tom and Meredith Brokaw, at around 1 p.m. today, were in a three vehicle accident on the Bruckner Expressway. The Brokaws were in the far left lane when they noticed a spool of cable bouncing along the far right lane.

Neither Tom nor Meredith were injured but tragically the driver of the SUV was thrown from her vehicle and killed. Tom and Meredith are greatly saddened by this loss of life.