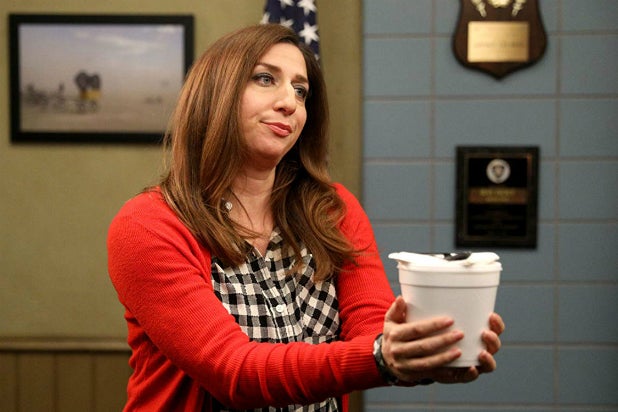 That is, except showrunner Dan Goor, who had this lovely message for his outgoing civilian administrator:

We’re not taking it as well as Goor.

Here are the 10 GIFs that best sum up our current emotional state:

Gina Linetti is leaving the b99 squad pic.twitter.com/v1n20doXxH

@chelseaperetti nooooOoooOoOoOOoOooooooooooooOoOOoOoOooOooooooooooOOoOoooo, you’re the best part of the show, life will never be the same without Gina Linetti to guide me through life ???? pic.twitter.com/GMtu7RDzbM

I cannot believe Gina Linetti is leaving b-99 pic.twitter.com/2hVhdn4v75

gina linetti is a state of mind and will always be with us pic.twitter.com/3TQhX0T9R4

This next one we don’t even understand. Doesn’t matter:

This is a tragedy in any language. But OK, we still owe you more GIFs.

ik the b99 screen writers will do justice to gina linetti but it won’t be the same without chelsea peretti on screen pic.twitter.com/tncA5EdCTh

gina linetti you will never be forgotten pic.twitter.com/gNch3NCp4v

I’m gonna miss so much Gina Linetti, she is just an iconic character! ????????‍♀️ I wish you all the best in this world because you deserve it pic.twitter.com/gdQKNEjPyg

Peretti said she will leave the show during its upcoming sixth season. NBC confirmed her departure, but said she’ll still appear in “several” episodes this season.

“B99 fans. Hiiiiiiiiiiii. Chelsea Peretti, here. I won’t be doing a full season of Brooklyn Nine Nine in Season 6,” Peretti said on her Twitter account Wednesday. “But that doesn’t mean I won’t ever be back, winky face emoji, heart emoji. I want to thank you for the hours you spent watching Gina be Gina.”

“Brooklyn Nine-Nine” will return to broadcast television for midseason. The critically acclaimed comedy is now on NBC after being canceled by Fox in the spring.