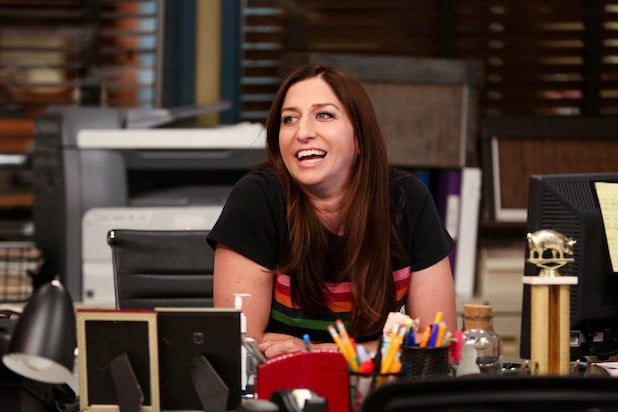 Gina Linetti (Chelsea Peretti) has left the 99th precinct — but she’ll be back and you won’t actually have to wait all that long to see the “human form of the 100 emoji” return to “Brooklyn Nine-Nine.”

Though the Nine-Nine formally said farewell to Gina on Thursday’s bittersweet episode, titled “Four Movements,” devoted to the Peretti character delivering a “Gina moment” to each member of the squad, she’ll be back for at least one more episode on the NBC comedy’s currently-airing sixth season.

“I think that there’s- well, I know there’s a definite return,” Peretti told TheWrap in an interview earlier this week. “But it’s so funny, like, no one tells me how to handle anything in entertainment, so I don’t even know if it’s supposed to be a secret when that return is (laughs). I’m assuming it is ’cause everything is always a secret all the time. But I know I am back for an episode this season and who knows? I guess it’s possible there could be more in the future depending on how they approach writing the remaining episodes of the season.”

Here’s the photo Peretti shared on social media — after this interview — teasing her upcoming return:

Because Gina left the Nine-Nine to follow her dreams — whatever they may be, ’cause she hasn’t totally figured that part out yet — we asked Peretti where exactly we will find her when she does appear on the Dan Goor-created comedy again later this season.

“I know what they’ve created for her and it’s let’s just say big things,” she said. “She really has found her– a way to make her mark in the world, that’s for sure.”

Surprisingly, that isn’t through dance. “It’s perhaps even more inspiring than that,” Peretti said, adding, “it’s a form of mind control (laughs).”

For her final “Brooklyn Nine-Nine” episode as a series regular, Peretti requested Goor give her straight comedy, “like high stakes comedy, physical stuff” as she didn’t want to “just be behind the desk.”

And while he gave her that in the form of Gina and Jake’s (Andy Samberg) mission to lock down Mario Lopez as a celebrity guest at her goodbye party, Goor also pushed Peretti into one of the most intense scenes she’s ever performed on the show: a chess match between Gina and Captain Holt (Andre Braugher).

“I had actually wanted to do a spa day or something with Captain Holt and have this whole secret routine that you realize they’re doing in his office,” Peretti told us. “They close the blinds and they are doing all this stuff and you realize that they have a friendship that is even deeper than you would have ever known. I had thought that would be such a cool reveal, you know?”

“Now, Dan and me were cracking up talking on the phone about all of these ideas and stuff,” she continued. “And then it turned into a chess game and I was like texting him, like, ‘Dan, I don’t know how to play chess at all, it’s completely out my wheelhouse.’ And he’s like, ‘Ahh, you’ll be fine.’ And I’m sending him pictures of myself making expressions in panic.”

“And it literally was so hard because Andre is a serious actor and I don’t know how to play chess, so I’m already two steps behind. (laughs). And there was a chess expert walking around saying, ‘So this is a rook.’ (laughs) And I was in a panic about it, because Andre wanted the hand movements to be realistic when we’re playing so it doesn’t look super fake, which of course I respect, that’s wonderful. Meanwhile, I had so many lines in that scene and then I was supposed to be doing realistic chess playing, which I’ve never a day in my life played chess!”

“So for me I felt completely out of my wheelhouse, I had to step aside and go cry at one moment because I was so panicked. (laughs) I mean it really was like for me the most epically stressful thing, so I’m very glad to hear you enjoyed it and it turned out well. I’ve always loved Gina and Holt’s relationship, but for me this one was an extra challenge.”

(Yes, TheWrap did tell her we enjoyed it and it turned out very well.)

Gina and Holt do have a particularly special relationship, so we had to ask Peretti who she thinks could possibly fill Gina’s shoes as the captain’s new assistant.

“Hm, that’s a good question. Maybe Marie Kondo? (laughs)” she suggested. “I’m trying to think, it would have to be some kind of a genius. The obvious answer would be like Beyonce or Rihanna, but I want to go to the unexpected answer of some genius. I don’t know who though, that’s the problem. I was going to say [Mark] Zuckerberg but he’s in too much hot water at this point. (laughs)”

Perhaps the Gina statue that made its big entrance into the precinct in the final moments of the episode can temp for a while. Though Peretti would probably prefer the bronzed version of herself didn’t take her place, seeing as she isn’t a fan of how it turned out.

“Well, I just couldn’t believe I did a shoot that was like 360 degrees of photos all around, ’cause they were going to make this crazy photo-realistic statue,” Peretti said. “And then the statue came and everyone’s like, ‘HUH?’ (laughs).”

“So I was adding all those lines about the hair and the hands and jeans all looking crazy and stuff,” she continued. “And I know that made it in because I had to ADR for it and I was very pleased because I saw the statue and was like, ‘This looks nothing like me, can I please make a joke about it. You guys are killing me, like, who is this woman?'”

The statue will remain in the precinct, according to Peretti, however it will be moved away from its current location in the very center of the room. We’re pretty sure Gina won’t be happy to hear that.