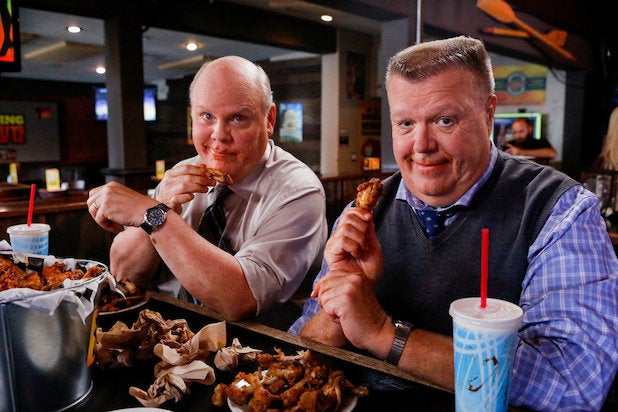 While the first episode of Season 6 of “Brooklyn Nine-Nine” was devoted to Jake and Amy (and weirdly also Holt), the second gives the show’s other fan-favorite couple its full attention. Yes, we’re talking about Hitchcock (Dirk Blocker) and Scully (Joel McKinnon Miller), whose backstory is finally addressed on Thursday’s episode, aptly titled, “Hitchcock & Scully.”

The installment centers around Jake (Andy Samberg) and Boyle (Joe Lo Truglio) trying to get to the bottom of what really happened when some money went missing on a drug case the now-bumbling Hitchcock and Scully worked back in 1986, for which they are currently under investigation by NYPD Internal Affairs. (Don’t worry, as you saw, it all works out in the end.)

The episode gives us more than a few flashbacks showing how badass and ripped the young cops — who went by Flat Top (Scully) and The Freak (Hitchcock) were in the ’80s — once were and how their favorite restaurant, Wingsluts, led to their current physiques. But that wasn’t always the plan for their origin story.

“There were several ideas,” “Brooklyn Nine-Nine” creator Dan Goor told TheWrap, when discussing the episode with reporters at a press day last month. “One of the ideas was that they had never changed, that they were always like this, that literally we’d go back to the 1980s and see them as they are now in the 1980s. But it just seemed like a funny transition to see them go through and we’ve laid in the Wingsluts clues for years, so it felt very true to their characters. And then … our casting director, Juel Bestrop, found these two guys [Alan Ritchson, who plays Young Scully, and Wyatt Nash, who plays Young Hitchcock] who are so perfect. They look so much like them. They have the same essence.”

Samberg agreed: “It’s crazy. I was into those dudes.”

As for how Miller and Blocker felt about a whole episode devoted to their on-screen alter egos, well, they were honored.

“It was very exciting, you know, we were very pleased to be showcased, so to speak, in an episode like that,” Miller told TheWrap. “And I think the fans are in for a real treat.”

Blocker noted that the two — now staples on the series that made its jump to NBC this year after being rescued one day after cancellation at Fox — didn’t even know they’d be around long enough to see an episode like this.

“We weren’t regulars in the beginning,” he said. “They didn’t know whether this was going to work or not, nor did we. We were just thrilled every week we got asked to come back.”

“I was told we were going to do four episodes and we’ve been in every one of them,” Miller added.