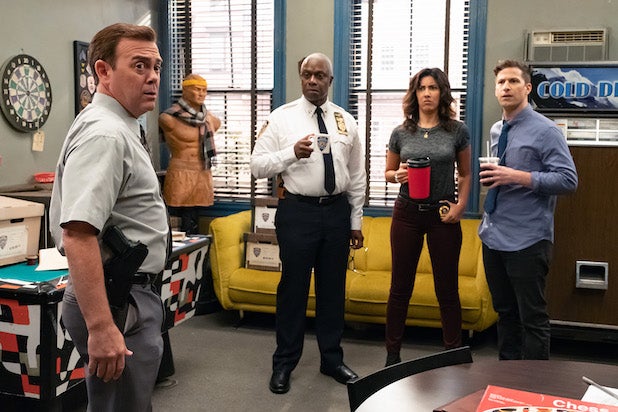 Less than two months after moving into its new precinct, “Brooklyn Nine-Nine” has been renewed for another season at NBC, set to air during the 2019-20 slate. This upcoming installment will be the seventh season for the Andy Samberg and Andre Braugher-led series overall and the former Fox sitcom’s second year on its new network.

“It’s been one of our great joys as a network to give ‘Brooklyn Nine-Nine’ a second life,” Lisa Katz and Tracey Pakosta, co-presidents of scripted programming, NBC Entertainment, said. “Cheers to Dan Goor, Mike Schur, Luke Del Tredici and David Miner, and our amazing cast and crew who each week turn New York’s finest into New York’s funniest.”

As TheWrap reported earlier today, “Brooklyn Nine-Nine” is attracting 1 million more viewers per episode on its new channel than the old.

Through six NBC episodes this season, “Brooklyn” is averaging a 1.4 rating among adults 18-49 and 3.918 million viewers. Those Nielsen numbers count a week of delayed viewing for each episode, and they are up 8 percent and 34 percent, respectively, vs. the same point in the 2017-18 season.