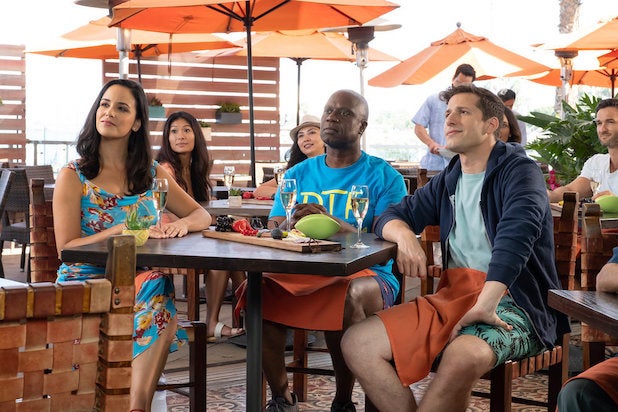 “Brooklyn Nine-Nine” must be loving its new precinct, NBC, right now, where it boasted its highest Nielsen ratings in two years among adults 18-49 with its debut Thursday night, according to preliminary numbers.

The show’s first episode on NBC is also a two-year high for the “Nine-Nine,” scoring the squad its best numbers since a special hour-long Sunday episode, which aired the night of an NFL overrun on Fox on Jan. 1, 2017, landed a 1.3 in the demo.

And, to top it all off, the first episode of “Brooklyn Nine-Nine” to air on NBC saw a 50 percent increase over the 0.8 demo rating the network is currently averaging in that 9 p.m. Thursday slot this season.

The premiere was also the No. 1 most-social episode of a scripted comedy series of the 2018-19 season to date, across all of primetime television, with 858,900 “total interactions” across Instagram, Twitter, and Facebook.

You can read more from TheWrap about how “Brooklyn Nine-Nine” fared in Nielsen ratings on Fox — before it was canceled and then saved by NBC just one day later — here.

Though the “Nine-Nine” came in hot last night, their big transfer couldn’t help NBC overcome CBS’ sitcom block — which included the premiere of new comedy “Fam” — with the latter network taking both the key demo and total viewers wins for Thursday primetime.

ABC was third in viewers with 3.3 million. Following a pair of encores, from 9-11 p.m. the “Truth and Lies: Monica and Bill” documentary special settled for a 0.7/3 and 3.7 million viewers.