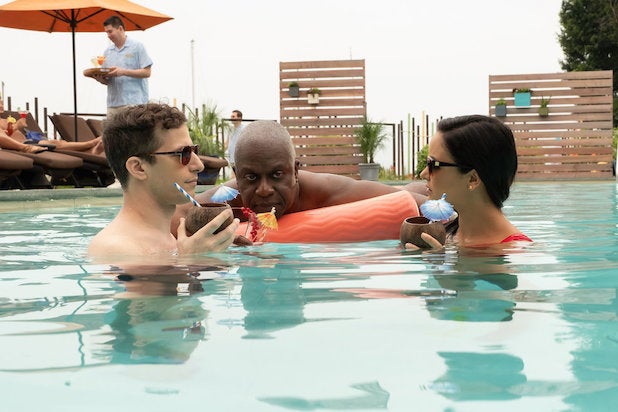 “OK, it’s time to celebrate. You know what that means: this B needs a C in her A.”

We’re guessing your reaction to that line — spoken by Melissa Fumero’s Amy Santiago on the Season 6 premiere of “Brooklyn Nine-Nine” tonight — was probably similar to the “Oh, my God!” that it elicited in Jake (Andy Samberg). You know, if you put your mind in the gutter long enough to figure out how dirty that sentence might be — out of context, of course.

It turns out Jake misunderstood what his new wife was saying, as she had chosen to abbreviate, “This babe needs a coconut in her arms” — a running joke the couple had going on their honeymoon about continuously drinking out of the tropical item while celebrating their new union.

And that abbreviation explanation led to this response from Jake: “Ohhhh, I thought you were saying [insert several bleeps over Samberg’s character saying what everyone with a dirty mind thought Amy meant here].” And that got an “Oh, my God!” from Amy and a “Yeah, that was my reaction!” from Jake.

Of course TheWrap had to ask Fumero how they managed to get this coconut line (and what it implies) into the episode, when we caught up with her at a press day earlier this month. And she gave all the credit to the show’s new home network, NBC.

“Yes! I heard the one that we did for fun made it into the episode,” Fumero said.

When TheWrap said that, uh, the joke was perhaps “very borderline” for a broadcast network’s Standards and Practices — seeing as we can’t even explain it in detail here — she said, “Oh, it is, yes!”

Fumero’s “Nine-Nine” co-star Chelsea Peretti (who plays Gina Linetti) added: “That’s so funny, ’cause when you guys did that I was like, ‘Please let this be the one. Please!’ It was so funny.”

Also Read: 'Brooklyn Nine-Nine' Boss on Why a 'This Is Us' Crossover Is Probably a Bad Idea

“Yes! I really didn’t think they were gonna let us do that,” Fumero said. “Thanks, NBC!”

We can’t think of a joke that dirty that aired during the comedy’s first five seasons on Fox, and that’s counting many a “title of your sex tape.” So if you’re a fan of raunchier bits, here’s hoping the 99th precinct keeps working blue now that it has a different broadcaster’s censor to slip under.

Read more from our interview with the “Brooklyn Nine-Nine” crew — in which they talk about Jake’s “Die Hard” sex fantasy — here.