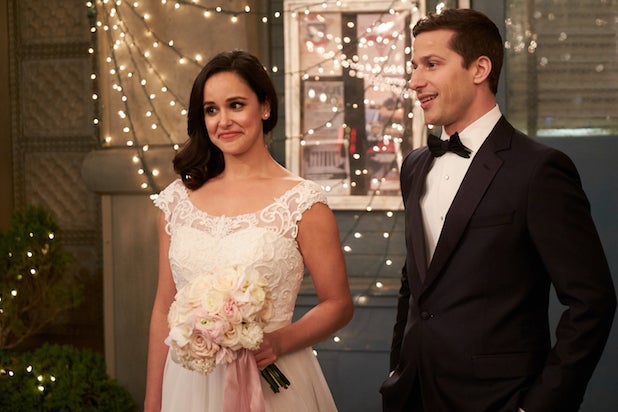 No one is happier than us that “Brooklyn Nine-Nine” was picked up for a sixth season by NBC. Nobody. But if (and we do mean only if) the comedy hadn’t been revived just 24 hours after being canceled by its current network, Fox, earlier this month, we would have survived because Dan Goor & Co did such a great job with the Season 5 finale.

“Nine-Nine” aired its fifth-year closer, “Jake and Amy,” Sunday night, which centered around the titular couple’s nups — the toitest you’ve ever seen. Yes, going out with a wedding would have been a super cliche move, and Goor said in recent interviews that it was not his plan for how to end it all (as he was hoping against hope the show would be renewed). But the episode was a great installment that managed to give not just Jake (Andy Samberg) and Amy (Melissa Fumero), but every member of Brooklyn’s fictional 99th precinct enough time in the limelight. It would have been a fine goodbye.

IF, remember we said IF. Geez.

Gina (Chelsea Peretti) laid it out so perfectly at the very beginning of the episode she might as well have been smashing through a fourth wall: It looked like everyone was “pairing off for adventures” to help the couple make it through several crises on their big day, so she decided to go with Captain Holt (Andre Braugher) because they “have the best rapport.”

Holt’s assistant helped him train his dog Cheddar to be the replacement ring bearer for the nups, but really their story was focused on Gina bringing him to the realization that he’d be OK one way or the other if he opened an email that told him the status of his candidacy for Police Commissioner.

Rosa (Stephanie Beatriz) and Terry (Terry Crews) spent the episode trying to get Amy’s veil dry cleaned, but more importantly finding a new love interest (Gina Rodriguez) for the recently-out copper — with Terry making it clear that everyone in the Nine-Nine supports Rosa.

And then there was Jake, Amy and Boyle (Joe Lo Truglio), because of course Boyle would be the third wheel here, even on their wedding day. Actually, especially on their wedding day, as he was the one who kinda screwed it all up. Jake’s BFF put an announcement in the paper that let Amy’s nemesis (Jake was very jealous she has one and he doesn’t, until she said they’d share him as a married couple) know where she was getting married, which allowed him to place a bomb at the venue.

The explosive was the real problem of the day, as it got everyone off track and brought Amy’s ex Teddy (Kyle Bornheimer) onto the scene to try and derail this love train even more. And while they didn’t remove the threat in time for Jake and Amy to get hitched as they planned, Boyle fixed it all by throwing together a last-minute wedding outside the precinct that was stunning.

Also Read: 'Brooklyn Nine-Nine' Season 6: Fans Will Have to Wait Until Midseason for NBC Premiere

Oh, and Hitchock (Dirk Blocker) and Scully (Joel McKinnon Miller) came back from their fake assignment to get a replacement for the band with the talented Fred Armisen’s Mlepnos — who had a tiny, but memorable bit in the pilot — just in time to send Amy down the aisle right with a violin solo.

That tied everything up in a noice bow, until they were all back at the squad’s favorite bar, where Holt decided he could finally open that email. Of course it all ended on a cliffhanger when he assumed everyone could tell from the blank expression on his face whether he had made commissioner or not. They couldn’t. But the conclusion of Holt’s possible promotion storyline doesn’t ultimately matter as much as having a finale full of classic “Nine-Nine” jokes and character interactions. After all, Gina’s entire point was that life is unpredictable and he’d live if he didn’t get it. And we’d live if we didn’t know.

If, we repeat if. Good lord.

“Brooklyn Nine-Nine” will return on NBC — but not till midseason.