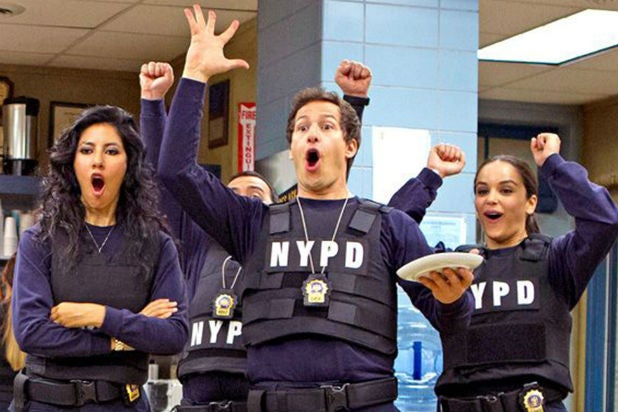 The 99th precinct is celebrating tonight as “Brooklyn Nine-Nine” has been saved by NBC just one day after being canceled at Fox.

The cast and executive producers of the Andy Samberg and Andre Braugher-led sitcom took to Twitter Friday to express their gratitude over the 13-episode season 6 pickup by the Peacock with some of the most on-brand messages we’ve ever seen.

“So happy to announce: NBC IS PICKING UP BROOKLYN 99 for SEASON 6!!!” Samberg, who plays Detective Jake Peralta, tweeted via The Lonely Island’s official account.

“Hey everyone, just wanted to say no big deal but….NBC JUST PICKED #BROOKLYN99 UP FOR SEASON 6!!!” creator Dan Goor wrote. “Thanks in no small part to you, the best fans in the history of the world! Nine-nine!!!!!!!!!”

“NBC TAKIN B99 OFFA FOXES HANDSIES BBBBBSSSSSSssss,” Chelsea Peretti, who plays Gina on the comedy, tweeted along with a GIF of DJ Khaled saying, “You Smart.”

“#Brooklyn99 IS COMING BACK FOR SEASON 6 YOU GUYS ON NBC!!!!!” Melissa Fumero, who plays Amy, wrote, along with a GIF of Peretti in character. “You did this!! You got loud and you were heard and you saved our show!! Thank you!! Thank you to NBC!! NINE NINE!!!!!”

Fans got in on the fun too, unable to contain their, “NINE NINE” cheers.

“Ever since we sold this show to Fox I’ve regretted letting it get away, and it’s high time it came back to its rightful home,” said Robert Greenblatt, Chairman, NBC Entertainment said on Friday, after the network announced the big news. “Mike Schur, Dan Goor, and Andy Samberg grew up on NBC and we’re all thrilled that one of the smartest, funniest, and best cast comedies in a long time will take its place in our comedy line-up. I speak for everyone at NBC, here’s to the Nine-Nine!”

Goor executive produces along with Michael Schur, David Miner and Luke Del Tredici — marking Schur’s third show on NBC this season along with “The Good Place” and “Abby’s.” Goor and Schur previously worked together at NBC on “Parks and Recreation.”

The news brought about an outpouring of support from fans who objected to the decision, including from Mark Hamill, Guillermo del Toro and Lin-Manuel Miranda —  who encouraged his followers to tweet “#RenewB99” to save the show.

Hey everyone, just wanted to say no big deal but….
NBC JUST PICKED #BROOKLYN99 UP FOR SEASON 6!!!
Thanks in no small part to you, the best fans in the history of the world!

So happy to announce:
NBC IS PICKING UP BROOKLYN 99 for SEASON 6!!!

#Brooklyn99 IS COMING BACK FOR SEASON 6 YOU GUYS ON NBC!!!!! You did this!! You got loud and you were heard and you saved our show!! Thank you!! Thank you to NBC!! NINE NINE!!!!! pic.twitter.com/cTycfF4FoR

Do you know what it means to have your faith restored in humanity?
BE. CAUSE. I. DO.
Thank you, @NBC. @Brooklyn99FOX https://t.co/apoMOWvn15

It’s NINE o’clock and the NINE NINE is now on NBC. We are so grateful for our fans. THANK YOU. You made this happen. And we’re excited about this amazing new chapter for Brooklyn Nine-Nine. ❤️????????????

Good news: Andy is back on NBC!!!
Bad News: Andy has SO many unpaid NBC parking tickets!!! https://t.co/Mti5aWNBbr

What a time to be alive. #Brooklyn99 https://t.co/B2HXaJNmSl

Brooklyn Nine-Nine coming back for a sixth season on nbc like pic.twitter.com/XphatQfWTa