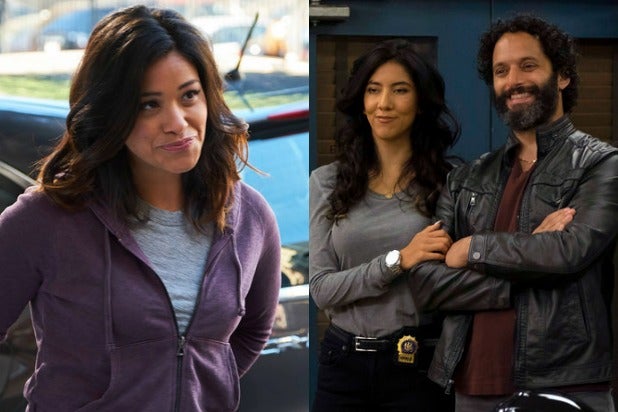 If “Brooklyn Nine-Nine” can only manage to wrangle back either Gina Rodriguez or Jason Mantzoukas for a storyline on its upcoming sixth season, you better hope star Stephanie Beatriz isn’t the one asked to pick which guest star gets to return, seeing as we’d probably end up with no one.

Beatriz, who plays Detective Rosa Diaz on the former-Fox-now-NBC comedy, told TheWrap she’s not capable of choosing which of her on-screen love interests — the brand-new Alicia (Rodriguez) or her former fiance Adrian Pimento (Mantzoukas) — she’d rather see make a comeback in the next batch of episodes.

“Well, that’s really a ‘Sophie’s Choice,’ isn’t it?” Beatriz told TheWrap during the show’s press day earlier this month, ahead of its Season 6 premiere Jan. 10 on NBC. “That’s a ‘Sophie’s Choice.’ My hard pitch- I can’t even say it!”

(OK, we didn’t get to hear the pitch, but Beatriz promised to tell co-star Andre Braugher — who plays Captain Holt and was sitting right next to her that day — once they were away from reporters’ prying ears.)

“I really can’t choose between those [two],” Beatriz continued. “Jason and Gina are so- [they’re] such different actors, but they both are so good at what they do.”

“Gina, I think, really has this like way of making you fall in love with her right away,” she added. “There’s something about her warmth on screen that just emanates out of her as an actress. And Jason is so wild and, like, you just have no idea what you’re about to get. And it’s so thrilling to work with somebody that’s such an incredible, great improv artist. And people don’t think of improv as an art, I think, unfortunately, but he is so damn good at it. So it’s a ‘Sophie’s Choice.’ I can’t answer that!”

Luckily, this decision isn’t actually Beatriz’ call, and “Brooklyn Nine-Nine” creator/showrunner Dan Goor and star Andy Samberg say it’s currently “undetermined” and “undecided” if either Mantzoukas or Rodriguez will be back this season.

However, Dan did say “no” when we asked if the story between Alicia — who was first introduced on the show’s Season 5 finale/most-recent episode, not long after Rosa came out as bisexual — and Rosa is over. So there is that at least.