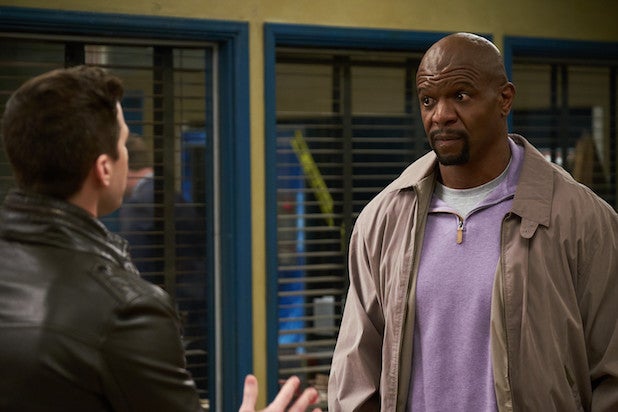 OK, in the real world it was actually actor Terry Crews thanking Mark Hamill for being one of the fans to rally around “Brooklyn Nine-Nine” after it was canceled by Fox on Thursday — a move that led to NBC picking it up for a 13-episode sixth season on Friday.

“@HamillHimself I want to personally THANK YOU Mark for using the power of the force to save Brooklyn Nine Nine! *Wipes dirt off shoulder*” Crews wrote, making a solid “Last Jedi” reference.

Crews also gave shoutouts to famous fans Lin-Manuel Miranda and Sean Astin for freaking out with the rest of Twitter and leading the social media campaign to save the Andy Samberg and Andre Braugher-led sitcom within one day of it getting the axe at Fox.

“@Lin_Manuel Thank you for your support sir!!! We should do a musical episode of BROOKLYN 99 in your honor!” Crews tweeted at the Broadway star, and throwing a “BROOKLYN 99 is the ‘RUDY’ of comedies!! Thank you for keeping us in the game!” Astin’s way.

The Peacock announced Friday night that it had picked up the beloved series late on Friday — leading to yet another freakout on Twitter, but with positive shouts of “NINE NINE!” from the cast and fans alike.

“Ever since we sold this show to Fox I’ve regretted letting it get away, and it’s high time it came back to its rightful home,” said Robert Greenblatt, Chairman, NBC Entertainment. “Mike Schur, Dan Goor, and Andy Samberg grew up on NBC and we’re all thrilled that one of the smartest, funniest, and best cast comedies in a long time will take its place in our comedy line-up. I speak for everyone at NBC, here’s to the Nine-Nine!”

@HamillHimself I want to personally THANK YOU Mark for using the power of the force to save Brooklyn Nine Nine! *Wipes dirt off shoulder*

@Lin_Manuel Thank you for your support sir!!! We should do a musical episode of BROOKLYN 99 in your honor!

@SeanAstin BROOKLYN 99 is the “RUDY” of comedies!! Thank you for keeping us in the game!