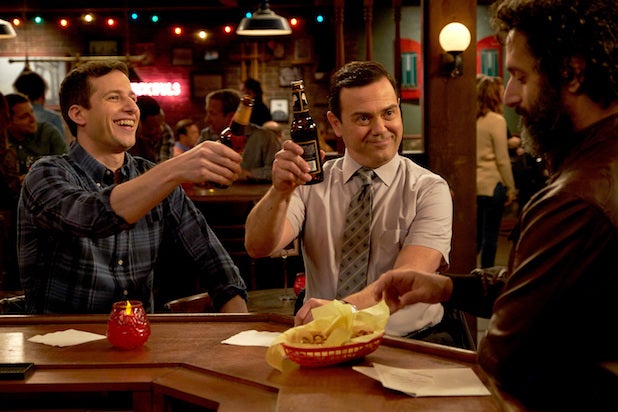 But with the comedy’s channel switch for its sixth season — which came about following serious fan outcry that led NBC to save the series last May, less than one day after Fox gave it the ax — comes the question: Will the Andy Samberg and Andre Braugher-led sitcom see better Nielsen numbers when it starts working NBC’s 9 o’clock Thursday shift?

NBC placed “Nine-Nine” on what has in recent seasons been considered the network’s “comedy night,” which in the fall included a lineup of “Will & Grace,” “Superstore” and the now-“concluded” freshman series “I Feel Bad.” But with a new midseason schedule in place, Dwayne Johnson’s new series “The Titan Games” at 8 p.m. will serve as the lead-in for “Nine-Nine” tonight, with the midseason return of Mike Schur’s “The Good Place” being on the other end at 9:30/8:30c.

Season-to-date, the now-“Brooklyn” time slot on NBC has averaged a modest 0.8 “live” rating and 3.428 million total viewers, excluding sports. It’s a tough night for comedies — at least, the ones going up against CBS’ strong sitcom lineup.

The previous “Brooklyn Nine-Nine” season premiere (on Fox) received a 0.7 demo rating and 1.963 million viewers. At the time, the Tuesday sitcom followed “The Mick.” The finale, which featured Jake (Samberg) and Amy’s (Melissa Fumero) wedding and was almost the series finale, got a 0.8 rating and 1.788 million viewers. That one aired on a Sunday in May and followed “The Simpsons.”

Also Read: 'Brooklyn Nine-Nine' Boss on Why a 'This Is Us' Crossover Is Probably a Bad Idea

Those still relatively low Nielsen numbers explain why Fox canned it, but “Brooklyn” carries plenty of value elsewhere. For starters, it’s a critical darling and an excellent half-hour show — hence the outcry over Fox’s cancellation. Plus, in its final Fox season, “Brooklyn Nine-Nine” was the broadcast network’s second-most upscale series behind only “New Girl,” which ended anyway.

We’ll find out soon enough if Fox’s loss is NBC’s gain. Having seen the Season 6 premiere in advance, we can promise a good time for any Nielsen panelists that vote with their remotes.