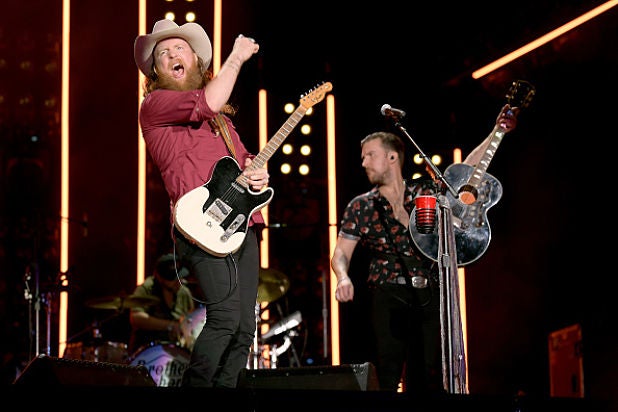 Guitars and vocals were replaced with the sound of fans booing on Thursday as the Brothers Osborne’s halftime performance at the Chicago Bears-Detroit Lions game was delayed for several minutes by audio issues.

The first two attempts by the country music duo to start their performance were derailed by sound problems. Fox announcer Joe Buck, noting the boos from the eager fans, said: “The crowd [is] almost willing this to happen.”

Seconds into the country duo’s performance at Ford Field in Detroit, the sound cut out and the crowd let out an audible gasp. You can check out the mini-fiasco below:

When the Detroit Lions forget to pay their electric bill. pic.twitter.com/WV0yhJqAPa

“We’ll get it figured out,” one of the brothers said into the microphone, as fans continued to wait in silence on the turf at Ford Field.

Buck asked his partner Troy Aikman if they had anything else they wanted to discuss from the first half, which ended with the Lions leading 17-10, and they both decided there wasn’t much to say to break up the confusion.

It’s unclear what caused the audio glitch. The NFL did not immediately respond to TheWrap’s request for comment.

Also Read: Fox Sportscaster Erin Andrews on How to Succeed in a Male-Dominated Field: 'Stop Caring'

The moment, of course, was instantly mocked on Twitter — with even the local paper getting in on the jokes:

They just Detroit-Sports’d this halftime show

Appropriate to this entire halftime disaster, Brothers Osborne is killing it with "It Ain't My Fault."

If this Brothers Osborne snafu signals the end of expensive music halftime concerts in the NFL I am 100% cool with that.

I mean I understood why Beyonce killed the power in the Superbowl but THE BROTHERS OSBORNE???

Detroit: They can't even do a halftime show properly.

It's probably for the best.

I am 100 percent certain that either of those guys from The Brothers Osborne would be a better option at QB for the #Bears in the second half.