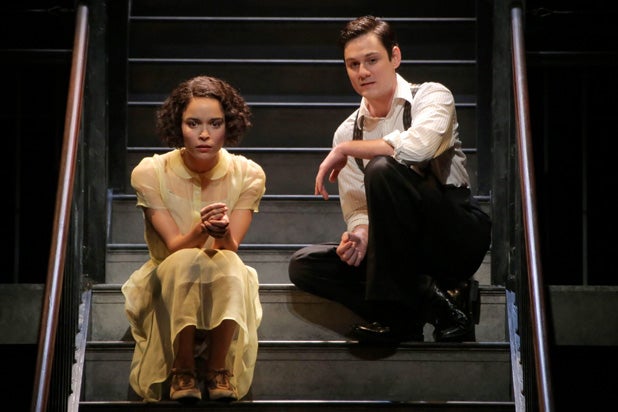 “He Brought Her Heart Back in a Box,” which opened Tuesday at Brooklyn’s Theatre for a New Audience, is an elegiac wisp of a memory play by Adrienne Kennedy that reflects the all-too-frequent tragedy resulting from interracial love in the Jim Crow-era American South.

We meet Kay (Juliana Canfield), a young woman based on Kennedy’s own mother, and Chris (Tom Pecinka), the white son of the town’s local bigwig (and benefactor of its school for “coloreds” where Kay is a student).

As in most of Kennedy’s work, naturalism is eschewed in favor of a more roundabout form of exposition that relies as much on poetry, testimony and even song as it does on traditional dialogue. Mood is given primacy over plot — though there is plenty of story embedded in this “Box” as Kay seeks to unravel the mystery of her mother’s death as a teenager.

Canfield and Pecinka, both recent graduates of Yale Drama School, bring a sense of flirtatious playfulness to their roles at times — and then pivot skillfully to the weightier themes of racial injustice and loss that will keep them separated.

With her capable handling of this production, Yionoulis argues for a revisiting of Kennedy’s earlier plays — which are more frequently read and studied than actually performed. Hers is a challenging body of work, but this “Box” deserves to be unpacked — in every sense — on a stage.