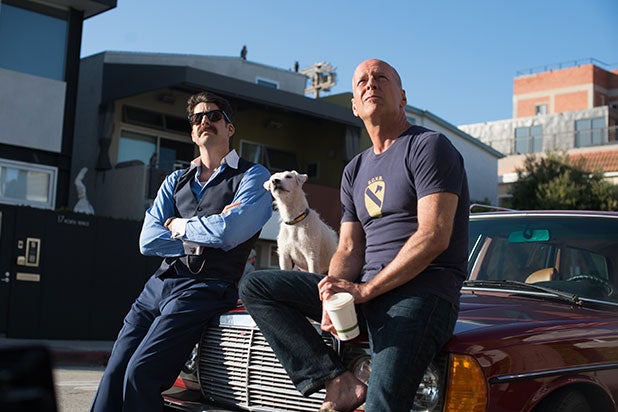 RLJ Entertainment has picked up the U.S. rights to the action comedy “Once Upon a Time in Venice” starring Bruce Willis and Jason Momoa, Mark Ward, RLJE’s Chief Acquisitions Officer, announced Tuesday.

Directed by Mark Cullen, the film also stars John Goodman, Thomas Middleditch, Famke Janssen, Adam Goldberg and Kal Penn. The film is the second collaboration between Willis and writers Cullen and Robb Cullen, who previously worked on “Cop Out” in 2010 together.

“Once Upon a Time in Venice” follows Venice Beach P.I. Steve Ford (Willis), a detective who is good with the ladies and bad with the punches and who is wild about his dog. When his beloved pet is stolen by local thugs, Steve makes a questionable alliance with their leader, Spider (Momoa).

“We are excited to work with such a talented ensemble cast, with Bruce Willis at its helm,” said Ward.  “Bruce Willis is an iconic actor known for his action roles and impeccable comedic timing. We’re proud to bring this film to the big screen and various platforms.”

Ward negotiated the deal with Voltage Pictures’ President and Chief Operating Officer, Jonathan Deckter on behalf of the filmmakers. The film is set for a summer 2017 release.